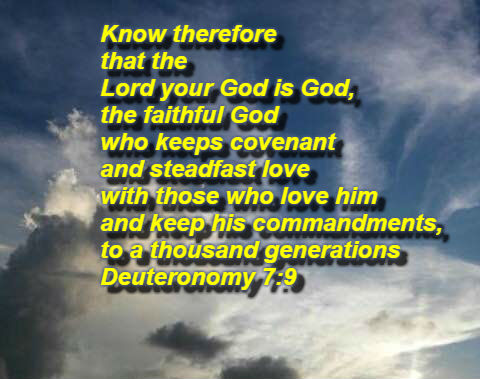 Deut. 79So you know the LORD your God is God, the faithful God, who keeps His covenant of mercy to a thousand generations with those who love Him and keep His commandments.

The God of the Israelites, that is the one that chose them and claimed Him as his own, the LORD or rather YHWH is God. That is what he told Moses on the mountain when they met, I am who I am or I bees who I bees, I am existence. There is no other God. You may have heard Him make that claim in Last Sunday’s lessons.

The nature of the one true God, Yahweh (best grammatical guess how it was pronounced) is faithfulness. He is the faithful God. The claim he makes here in Deuteronomy, the handing over of the Law a second time is what he said in Exodus as he gave the Law, 205“I punish the children for their fathers’ sins, if they hate Me, to the third and fourth generation, but I am kind to thousands of those who love Me and do what I order.” And 346“the LORD, the LORD God, merciful and gracious, slow to get angry, rich in love and faithfulness, 7continuing to show mercy to thousands, forgiving wrong, rebellion, and sin, without treating it as innocent, but disciplining children and children’s children to the third and fourth generation for the sins of their fathers.”

Now no one ever kept the moral law, the Ten Commandments perfectly. But the Torah, the Law, also had in it provisions for when we broke the moral law and doing those things were part and parcel of keeping Yahweh’s commandments. Of course, having no one but Him as God was pre-eminent in keeping the commandments. Trusting no other gods and trusting only Yahweh and loving him was the main thing. Just look at David. He committed adultery and murder and according to the Torah he should have been stoned to death. Yet because he made Yahweh his God, looked to him for mercy and kindness, and confessed his sin Yahweh had pity on him and forgave him but not without temporal punishments to warn the rest of Israel as to what can happen when you broke His Law.

Yahweh had made a covenant of mercy with Abraham and that covenant stood alongside the covenant He made with the Israelites on the mountains. We see that in his name He revealed in chapter thirty-four. We see that revealed in the name He gave us when became man, Jesus. Yahweh saves is Jesus’ name. He is Yahweh who saves us in the flesh. He had mercy upon all humanity when he became the sacrifice for the sin of the world. By the shedding of His blood He had mercy on us all. By His death He has made a covenant of life for all who would trust in Him as their God.

Merciful God and Father, you are the faithful God who keeps your promises and merciful to all who look to you for help. For the sake of Jesus Christ, grant us your mercy, forgives us our sins and bring us at the last to everlasting life, through Jesus Christ who lives and reigns with you and the Holy Spirit, ever one God. Amen.