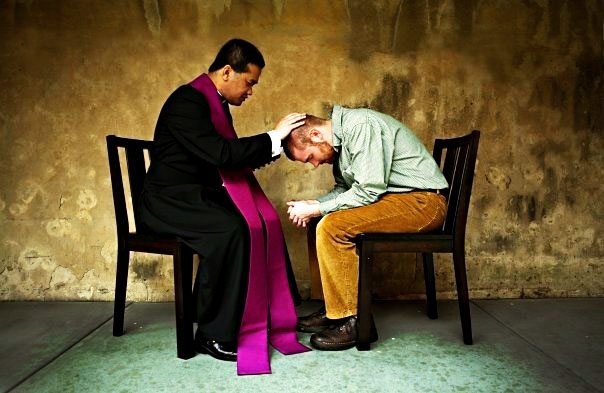 #DailyDevotion Want Jesus’ Peace? Confess Your Sins To Your Pastor

John 2019That Sunday evening the doors were locked where the disciples were, because they were afraid of the Jews. Then Jesus came and stood among them and said to them, “Peace to you!” 20When He said this, He showed them His hands and His side. Then the disciples were delighted to see the Lord. 21“Peace to you!” Jesus said to them again. “As the Father sent Me, so I send you.” 22When He had said this, He breathed on them and said, “Receive the Holy Spirit. 23Whenever you forgive people’s sins, they are forgiven; whenever you do not forgive them, they are not forgiven.”

The disciples aka the apostles were behind a locked door Easter evening because they were afraid the Jews were going to come after them next; the Jews meaning the ruling priests, Pharisees and Scribes. They had had heard the witness of the women earlier that day and Peter and John had gone out to the tomb and found it empty, but they did not believe the women’s report they had seen Jesus risen from the dead. It was at this time in this fear that Jesus came and stood among them. “Shalom! Peace to you!” Jesus says to them. And with that Jesus shows them his hands and his side, I guess they could already see his feet. It was really Jesus. The women weren’t just seeing things. Someone didn’t steal his body. They were delighted to see the Lord. They didn’t have to be afraid anymore. Jesus is risen from the dead as he said he would. If Jesus is alive then they don’t have to fear death anymore or anyone or anything. Such is the peace Jesus gives with his resurrection.

If Jesus is alive, if he is truly risen from the grave, then our sins can no longer accuse us. They have been atoned for by Jesus blood. Since Jesus is risen death and the grave have been conquered. The punishment for sin has been overcome. The enemies of human life have no power over our life as Christians. The devil who has the power over death cannot touch us. Now you may be thinking, “But wait a minute, I see people and Christians die all the time.” True, you may see their bodies die, but the Christian possesses eternal life in his heart. He does not taste death like unbelievers. The Christian merely transitions from life in world to life with Christ as we await the resurrection on the Last Day.

“Shalom! Peace to you!” Jesus says again to the now apostles. Jesus creates the office of the Holy Ministry by breathing, by speaking these words upon the apostles whom he is sending into the world even as he has been sent. In this office resides the authority of God and the Son of Man, i.e. Jesus to overcome sin, death and the power of the devil. The apostles and all who are ordained through his bride the Church are given authority to forgive, to remit, to send away the sins of people who are contrite, who are burdened, who are terrified of their sins and their consequences and thereby give them life. You may say, “But God alone can forgive sins!” Well Jesus demonstrated he had authority to forgive sins in the healing of the paralytic. Jesus gives that authority to his Church and to its ministers. O foul Satan, hush your mouth! You do not want us to have the peace of God. Yes, dear friend, burdened with your sins, you pastor has authority from Jesus and speaks in the stead and by his command to forgive you your sins when you repent. And being forgiven, you receive the same peace Jesus gave his disciples on Easter.

O Lord, our God, you have given us such great and marvelous gifts, you even give us men with your authority to forgive and retain sins that we may know your peace. Grant unto us that we may go and hear with our ears your forgiveness from them that we may live in your peace now and for eternity. In Jesus’ name we pray. Amen.