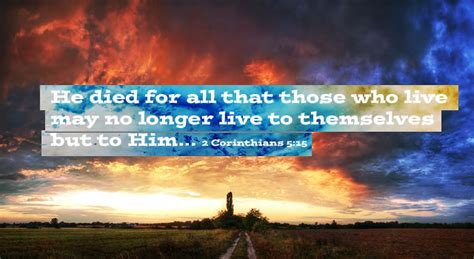 2 Cor. 5:11-17 11Since we know the terror of the Lord, we’re trying to persuade people. God already knows what we really are, and I hope you, too, are clearly conscious of it. 12We are not recommending ourselves to you again but giving you a reason to be proud of us so that you can answer those who boast about outward things but nothing in the heart. 13If we were crazy, it was for God. If we’re sane, it is for you. 14The love of Christ compels us because we’re convinced One died for all and so all have died. 15He died for all that those who live should no longer live for themselves but for Him Who died and rose for them. 16And so from now on we don’t think of anyone only as a human being. Once we thought of Christ only as a man, but not now anymore. 17So if anyone is in Christ, he is a new creation. The old things have passed away. They have become new.

Verse 11 really seems to go more with verses 14 and following. What is in between seems perhaps somewhat out of place here. Now to the Corinthians as a whole, it makes sense since they had seemed to have gotten the impression from those who appeare to them as apostles and something and talked down about Paul as if he were nothing. God knows what Paul and his companions are, heralds of the great King, Jesus of Nazareth. Paul’s humble ways among them seemed to have been mistaken for weakness rather than imitation of our LORD Jesus Christ. Paul however in his first letter and now even in this one makes it clear, his apostleship is nothing to sneeze at. He wants them to be proud of him, not because of is eloquence but because of his message about Jesus Christ. There were those boasting about outward things but Paul boast about what in his heart, the love of Christ for them.

Let us go back to verse 11. Now our translation says terror but many say fear. Now following verse 10 which talks about judgment I can see why they chose terror yet I think fear is still better when talking about believers and their relationship to their LORD Jesus Christ. Think in terms of when you walk into your bosses office for anything, enter a courtroom (even if you are not on trial), stand in a captial building pavillion or maybe even greet someone famous. You are not equals. He is your LORD, though he loves you.

Now the love of Christ compels Paul and company to preach and teach the good news of Jesus Christ. One died for all so all have died. This is the great reversal of the sin of Adam who sinned so all who were in him also sinned and died. Jesus died for all and rose for them all, which means you. He did this so you would no longer live for yourselves but for him who did this for you. What does this mean? It means as he has died for you you are called to sacrifice yourself for others. You are called to be of service to others. You are given eternal life to spend it on yourself but rather to show others the love Christ Jesus showed for you.

Even more so, we are called and will look at people around us differently. We do not look at them merely and only as fallen human beings. We do not look at them as our enemies. We look at them for whom Jesus Christ died and rose from the dead for. We see them as potential brothers and sisters in Christ. And for those who are in Christ, we see them as new creations. Christ is no longer looked at as mere human. He is our exalted LORD. Our fellow christians are exalted in Christ as well assumed into the Godhead with Christ and us with them.

Heavenly Father, grant us your Holy Spirit that the love of Christ compels us to speak of his good news and love those for whom he died for. In Jesus’ name we pray. Amen.