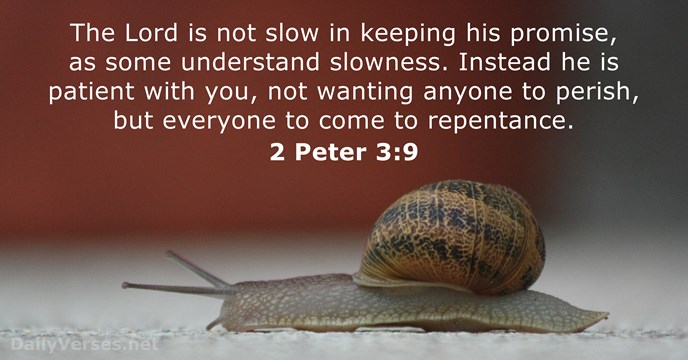 #DailyDevotions The LORD Is Being Patient With You. Repent!

2 Peter 38Don’t forget, dear friends, with the Lord one day is like a thousand years, and a thousand years are like one day. 9The Lord isn’t slow to do what He promised, as some people think. He is patient with you and doesn’t want any to perish but wants them all to come to repentance.

It is written in Psalm 904“A thousand years pass in Your sight like yesterday, like a watch in the night.” Some people who think they are clever like to use this passage from 2 Peter to do stupid stuff with Genesis chapter one like say “Each day is actually a thousand years” or to make this some interpretive key every time they want to make some ado about a day or thousand years rather than stick to the plain meaning of the text which isn’t meant to be symbolic. Don’t do that.

So what does this mean then and how should we use it? Very simply, God is outside of time. He recognizes time and talks to us about time as we understand and live in it, but it is all the same to him. He sees the first day, the last day and all the time in between all at once. The LORD is eternal. This is why he can make all sorts of contingencies for all our actions to make them work according to his plan. He is never surprised by what we may do. He’s a grand chess master you can say.

In any case, we may think the good LORD Jesus Christ sure is taking his time in coming again to establish his kingdom on earth and raising us from the dead to eternal life.  But as Peter says, he isn’t slow. Rather, our LORD is being patient with us, with the world. He’s letting the Gospel get out and work on us and the people around us. He letting the means of grace do their thing among us and in and through the world. You see, while we often want the LORD to hurry and crush all the bad guys, he wants them to repent, to come to faith in him and join us in the Church. If you aren’t certain of this just read Jonah. Jonah didn’t want to go to Nineveh to preach destruction because he knew if he did, they would repent and the LORD would relent the destruction he promised. It’s why he is so upset at the end. Don’t be a Jonah.

You see, the LORD isn’t a mean ogre of a God just waiting to wop people over the head with an ugly stick. He is as his name says, “the LORD, the LORD God, merciful and gracious, slow to get angry, rich in love and faithfulness, 7continuing to show mercy to thousands, forgiving wrong, rebellion, and sin, without treating it as innocent, but disciplining children and children’s children to the third and fourth generation for the sins of their fathers.” (Ex. 34:6,7)

And this is good news for you. The LORD is waiting on you to repent for your sins. He doesn’t treat you as your sins deserve, yet he condemns them, warns you of his coming wrath and promises you forgiveness in the name of Jesus Christ. So don’t delay, don’t wait and don’t sit on your hands. Confess your sins, turn from them and turn to Jesus so your soul may be saved on the Last Day.

O loving God and Father, you are patient with us so we may repent of our sins and be saved. Continually give us your Word so we may recognize our sins, repent of them and turn to Jesus for your salvation. In Jesus’ name we pray. Amen.