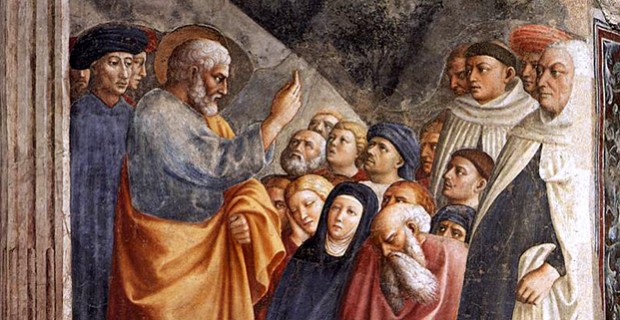 Acts 2:14-2114Then Peter got up with the eleven, raised his voice, and addressed them: “Jews and all you who live in Jerusalem, understand this, and listen to what I say. 15These men are not drunk, as you suppose. Why, it’s only nine in the morning. 16No, this is what the prophet Joel spoke about: 17“In the last days,’ God says, ‘I will pour out My Spirit on all people. Then your sons and your daughters will speak God’s Word, your young men will have visions, and your old men will have dreams. 18even on my male servants and female servants  in those days I will pour out my Spirit, and they shall prophesy. 18In those days I will pour out My Spirit on My servants, both men and women, and they will speak God’s Word. 19I will give you startling wonders in the sky above and marvelous signs on the earth below; blood and fire and a cloud of smoke; 20the sun will turn dark and the moon to blood before the coming of the Lord’s great and splendid day. 21 Then everyone who calls on the Lord’s name will be saved.”

Apparently St. Peter has never been to Bourbon St. or the Gulf Coast but his reasoning is probably valid to first century Jerusalem. They were not drunk (how would that explain speaking in foreign tongues they never learned anyway?). Instead Peter tells us the prophecy from the prophet Joel is being fulfilled. This also gives me a grin every time someone asks me, “Pastor, do you think we are living in the last days?” Well what did Peter say in his first sermon? “In the last days…” The last days had begun at the very latest with Jesus’ crucifixion and the sun turning dark for three hours mid-day. Maybe even earlier when he sent out the seventy-two and when they returned he said, “I saw Satan fall like lightning from the sky.” Isn’t that in Revelation with the battle of Satan and St. Michael? Yes it is. Well we probably can just go to the birth of John the Baptist and his ministry for he is the Elijah who was to come to prepare the way for the LORD Jesus.

In these last days, the Holy Spirit has been poured out on all flesh opening the way for the Gospel of Jesus Christ, the free gift of repentance and forgiveness in his name to be heard and received. He opens our mouths to tell others of the wonderful things Jesus has done for us by his death and resurrection. He has conquered sin, slavery to the fear of death and the power of the devil. The Holy Spirit suppresses the devil’s power over mankind so they can hear the Gospel of Jesus Christ and be saved. He works on our hearts and minds through the word we share about Jesus and proclaim. In Jesus we have the forgiveness of sins. Everyone who trusts in his name has eternal life.

So Peter proclaims, “Then everyone who calls on the Lord’s name will be saved.” We call on the name of the LORD Jesus Christ, that name which has been given us to call upon and be saved. There is no other name in heaven above, the earth or below the earth which mankind can call upon and be saved. Only the name of Jesus has been given us. It has been given to us freely as great costs to him. Call upon his name then with boldness and confidence for he does not lie or change his mind. His promise is better than gold. Call upon it and you will be saved.

Heavenly Father, grant us the boldness of your Holy Spirit that we may proclaim the name of Jesus as the way to salvation and may your Holy Spirit remove the obstacles in men’s hearts so they may receive his name with faith and call upon it to their salvation. In Jesus’ name we pray. Amen.