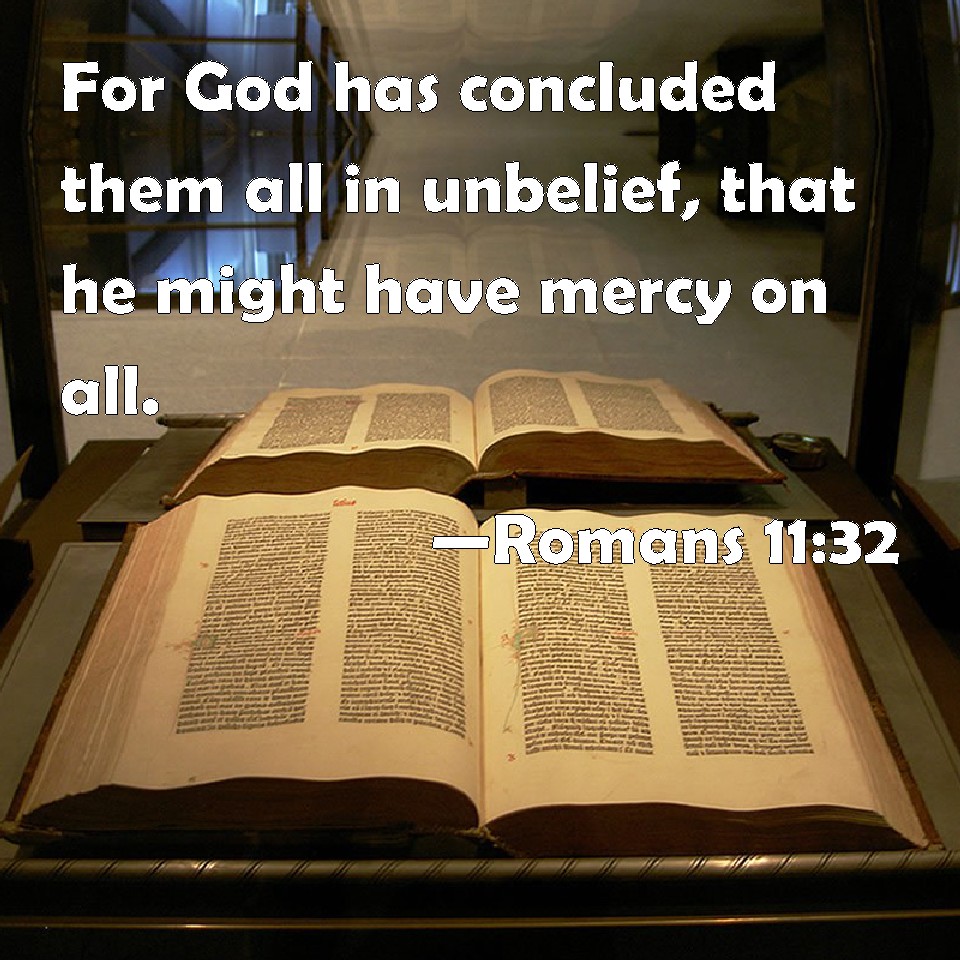 #DailyDevotion YHWH Jesus Wants To Have Mercy On All

Romans 1128God’s rule in telling the good news is to treat them as His enemies to help you. But He chose them, and so He loves them on account of their fathers. 29God never changes His mind when He gives anything or calls anyone. 30Once you disobeyed God, but now that the Jews have disobeyed, He has been merciful to you. 31So they also have disobeyed now that when you enjoy His mercy, they may have it, too. 32You see, God has put all people in a prison of disobedience in order to be merciful to all.

God’s ways are not our ways. His thoughts are higher than our thoughts and his ways higher than our ways. Which is why, even though Paul is speaking in human terms here, we still scratch our head a bit. At the time, in Paul’s day and still in ours, the Gospel of Jesus Christ puts hatred between Christians (Jews and Gentiles who believe Jesus is the Christ, the Messiah) and unbelieving Jews. His mercy towards us, mostly Gentile believers, puts us at odds with the unbelieving Jews who reject Jesus as their king who proclaimed they have no king but Caesar.

Yet, despite their unbelief, on account of the LORD choosing their fathers and making promises and covenants with them still chases after them with the good news. They will not be saved because of their unbelief. The physical blessings promised to Abraham still stand. For the sake of the remnant who will believe who will be born from their loins, the LORD still blesses them even as he did in Babylon. At one time, we Gentiles disobeyed the LORD and now he has been merciful to us. Now the Jews have disobeyed the LORD, he wants to be merciful to them as well. This of course shows the LORD’s overall, primary character which is mercy. As in chapter three of Romans Paul shows us there is no one good, not one, neither Jew or Gentile, he rounds back to it here, God has put all people in a prison of disobedience in order to be merciful to all.

This should not be a big surprise. He revealed it in his name in the Torah: Ex. 34 6“the LORD, the LORD God, merciful and gracious, slow to get angry, rich in love and faithfulness, 7continuing to show mercy to thousands, forgiving wrong, rebellion, and sin, without treating it as innocent, but disciplining children and children’s children to the third and fourth generation for the sins of their fathers.” Here we see the LORD’s nature, his primary will toward us. It is not anger or wrath. It is mercy and grace. Yet we also see sin does not just get winked at. He disciplines those who sin to call them back to repentance. This applies to both Jew and Gentile because the LORD Jesus Christ is no respecter of persons. So Jews who obstinately continue in unbelief will be judged as unbelievers. Gentile believers who fall away will be treated the same. Those who felt the discipline of the LORD and repent shall find a LORD Jesus Christ as he revealed his nature and name in Exodus thirty-four.

If you are Gentile and you believe in Christ, praise God and pray for the conversion of Abraham’s descendents. If you are Jew, know your Messiah is Jesus Christ who is your LORD, your Redeemer, your Savior and repent and be baptized into his name and know the blessings of your God that last into eternity.

Heavenly Father, your ways are higher than ours and your thoughts are higher than ours. Grant unto us repentance unto life and remove the stone hearts of your people Israel and grant them faith so they may truly be Abraham’s children according to the promise. In Jesus’ name we pray. Amen.