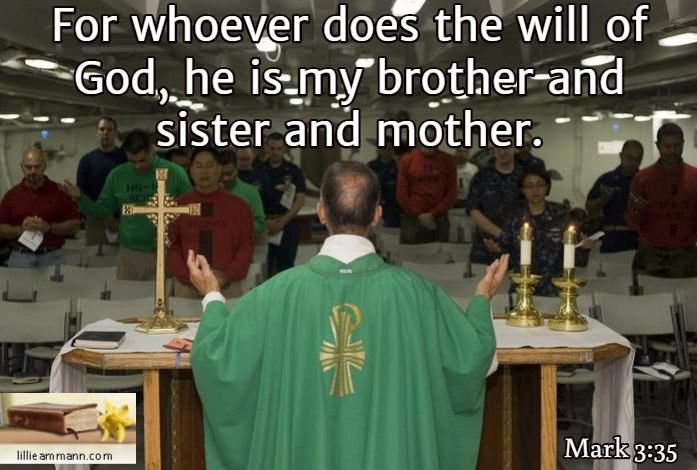 #DailyDevotion Who Are Your Mother, Brothers & Sisters?

20Then Jesus came home. Again such a crowd gathered that Jesus and those with Him couldn’t eat. 21When His family heard about it, they went to take charge of Him, because they were saying, “He’s out of His mind!”…31 His mother and His brothers came. They stood outside and sent someone to Him to ask Him to come out. 32The crowd sitting around Jesus told Him, “Your mother and Your brothers are outside looking for You.” 33“Who are My mother and My brothers?” He asked them. 34Then looking around at those who sat in a circle around Him, He said, “Here are My mother and My brothers. 35If you do what God wants, you are My brother and sister and mother.” So these verses in our devotion today sandwich the verses from yesterday which means either they have something to those verses or these have something to do with them. I’m more inclined to think the ones in the middle shed light on these.

It’s probably somewhat shocking to read these verses. Not so much because Jesus’ brothers did not believe in him yet but that Mary, his mother, who in Luke’s Gospel “kept all these things in her heart” seems to have forgotten who Jesus is and why he has come. Then again, she is a mother and no else has ever been the mother of God before (God used her seed, her flesh to become man). To be fair, if Mary knew Jesus couldn’t even eat because of the crowds I can totally see her trying to get to her son so she could take care of him. Yet even with this it seems she has forgotten who he is and what he can do. So she and Jesus’ brothers went to take charge of him. Now here is where the verse in between seem to come in. Certain Mary and his brothers must have heard Jesus’ rebuke to the Scribes, the Bible scholars, not directly because of the crowds then by word of mouth. If they were thinking Jesus was out of his mind, these words are there to rebuke those thoughts and call them to faith in him as the Son of Man, God’s Son.

Now his family sends word to him through the crowd they are seeking him. Another quick rebuke to set aside their thinking and to believe in him ensues. It again is quite shocking, when Jesus says, “Who are My mother and My brothers?” Jesus has begun his mission. When he was twelve and well his whole childhood, he humbly obeyed his parents. But not his devotion to his Father in heaven has come to take precedence. He must obey God rather than man. He looks around and says, “Here are My mother and My brothers. 35If you do what God wants, you are My brother and sister and mother.” And what does God want? Jesus tells us in the Gospel of John chapter 6, “is to believe in Him Whom He sent.”

The one whom God has sent is Jesus Christ of Nazareth. God wants you to believe in him. When you receive faith in Jesus and are baptized into Jesus you have entered into a new relationship circle that surpasses the relationship circle of this age. The circle of this age is according to blood. The one Jesus brings into creation is according to the spirit. Jesus reiterates this in chapter 10, 29“I tell you the truth everyone who gave up his home, brothers or sisters, mother, father, or children, or fields for Me and for the good news, 30will certainly get a hundred times as much here in this life: houses, brothers and sisters, mothers and children and fields, with persecutions, and in the coming world everlasting life.” Set your faith in Jesus and receive your eternal family.

Heavenly Father, through faith in Jesus Christ your Son, you gather us together as your eternal family. Keep us in this faith until you reveal us to the world as your children. In Jesus’ name we pray. Amen.