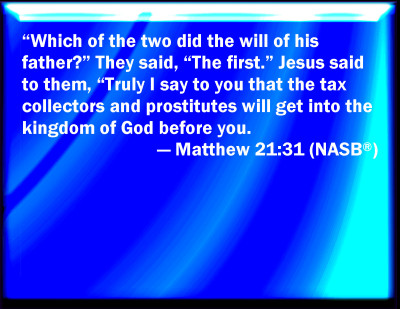 #DailyDevotion Which Son Are You Going To Be?

The human mind or the sinful flesh is a strange thing. I remember hearing this in church as a child and then for a period of time when my parents asked me to do something I would say, no, and then I would go do it, because, well, I wanted to be like the good kid in the parable.

Now this parable follows the chief priests and elders asking Jesus by whose authority he did the things he did and Jesus asking them by whose authority did John the Baptist baptize. They wouldn’t answer Jesus because either way it would put them in a bad light. Jesus tells this parable as a way to perhaps get them to repent of their position and come into the light of the kingdom of heaven.

Now John pointed the people also to Jesus, to follow him. The people who listened to John and did what John told them to do also followed Jesus. We see this with a number of the disciples Jesus had chosen. We see the same sort of people who accepted what John had said also accepting what Jesus says. We see the same sort of people who rejected John also rejecting Jesus. The LORD wanted people to accept John and Jesus’ teaching. Those who should have been first in line rejected both John and Jesus. Those we thought never would accept John and Jesus doing what the Father wanted.

Merciful God and Father, grant us a repentant heart that accepts Jesus as the LORD, repents of our sins and unbelief and lives our lives according to your will. In Jesus’ name we pray. Amen.