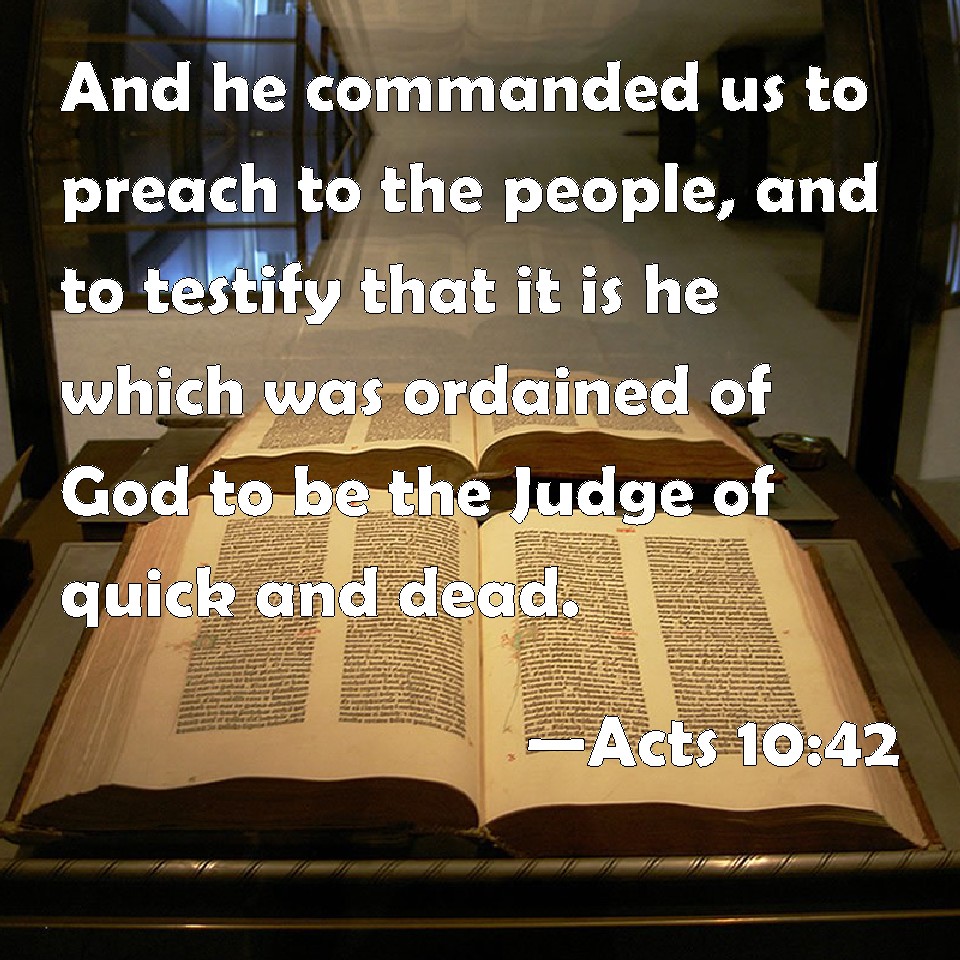 #DailyDevotion Which Camp Will You Be In? The Living Or The Dead?

Acts 10:34–43 34Then Peter spoke: “Now I really understand that God doesn’t favor one person over another. 35It doesn’t matter what people you belong to; if you fear Him and do what’s right, He accepts you. 36He sent His Word to the people of Israel to bring the news of peace in Jesus Christ — He is Lord of all!… 40But God raised Him on the third day and showed Him to us — 41not to all our people but to us whom God has chosen to be witnesses and who ate and drank with Him after He rose from the dead. 42He ordered us to preach to the people and warn them that God has appointed Him to judge the living and the dead. 43All the prophets declare that through His name everyone who believes in Him receives forgiveness for his sins.”

Peter had been called by God to go and share the good news of Jesus Christ with Cornelius, a Roman soldier, someone who is not a Samaritan or a Jew. The LORD Jesus had to break him down a bit through a vision. Somehow, the message of the prophets that God would draw the nations to himself never got understood by them. Now Peter sees and gets it. Cornelius was a God fearer. That meant he worshipped the God of Israel and contributed to the people of God but he never got circumcised, he had not fully converted to Judaism. Now Peter sees, “36He sent His Word to the people of Israel to bring the news of peace in Jesus Christ.” Israel was to bring the news of peace in Jesus Christ to the world. Jesus is Lord of all, all people, all nations, all tongues and all tribes.

Peter reviews for them what they already know about Jesus because they in Caesarea and would have heard about Jesus of Nazareth. He lets them know the good he did, his healings, his freeing people from the tyranny of the devil it was because God was with him and he had the anointing of the Holy Spirit. They knew Jesus was crucified by the Jews. But now he gives them some news, something he and five hundred disciples had witnessed, Jesus was raised from the dead whole and complete. They even ate and drank with him. He conquered death.

Now Jesus had ordered them to preach to the nations, God has appointed Jesus to be the judge of the living and the dead and that through his name everyone who believes in him receives the forgiveness of sins. Now I would like the break that down a bit. Jesus is the judge the living and the dead.  This is mentioned a number of times in the New Testament. What does this mean? He will judge those who still walk the earth (the living) and those who passed (the dead)? I don’t think so. At his coming every human being will be raised from the dead and given an immortal body. Everyone will be standing before him “alive.” What does this mean then? For one, the moment Adam decided to eat the fruit he died. His soul died. All his descendents inherit this death. St. Paul says, “you were dead in your trespasses and sins.” On the other hand, as soon as we have faith in Jesus we have eternal life. Jesus says, 24“I tell you the truth, if you listen to what I say and believe Him Who sent Me, you have everlasting life, and you will not be judged, but you have come from death to life.”(John 5) So the living are those who have faith in Jesus and the dead are those who do not. If you believe in Jesus, i.e., put your trust in him for forgiveness and salvation you are the living. If you don’t, you are the dead. What group will you be in on that day? I suggest you put your trust in Jesus and be in the living camp.

Heavenly Father, in your great mercy you sent your son Jesus Christ to die for our sins and raised him so we may be justified before you and have eternal life. Grant us this faith that on the day of judgment we are declared innocent and enter into your eternal kingdom. In Jesus’ name we pray. Amen.