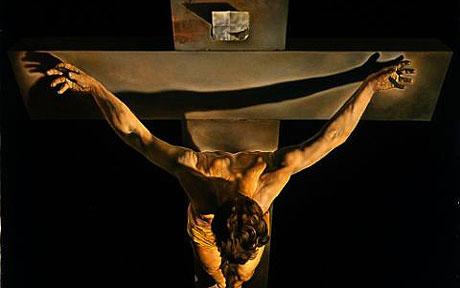 #DailyDevotion When You Are Forsaken By God…

Matt. 2741 The ruling priests, with the Bible scholars and elders, mocked Him in the same way, saying, 42“He saved others, but he cannot save himself. He’s King of Israel. He should come down from the cross now, and we’ll believe him. 43He trusts God — God deliver him now, seeing He delights in him. He said, ‘I am God’s Son.’” 44In the same way also the robbers crucified with Him insulted Him. 45At twelve o’clock darkness came over the whole country and lasted until three in the afternoon. 46About three o’clock Jesus called out with a loud voice, “Eli, Eli, lema, sabachthani?” which means, “My God, My God, why did You forsake Me?” 47Hearing Him, some of those standing there said, “He’s calling Elijah.” 48And just then one of the men ran, took a sponge, soaked it in sour wine, put it on a stick, and gave Him a drink. 49The others said, “Let’s see if Elijah comes to save him.” 50But Jesus called out again with a loud voice and gave up His spirit. 51Just then the curtain in the temple was torn in two from top to bottom, the earth was shaken, the rocks were split,….

We start today looking at what Jesus did at 3 o’clock. He cries out, “My God, My God, why did You forsake Me?” Now some of the crowd didn’t hear him correctly. They thought he was crying out for Elijah. But what he was doing was praying Psalm 22.  My guess is he did not only cry out the first verse but continued to pray the whole thing as a witness to and against those who were mocking him and crucifying them.

Some question whether or not the Father truly forsakes Jesus on the cross. They are working with philosophy and not the biblical witness. “How could God forsake God.” they question? Well how could God become man? Jesus stands in our place there on the cross, suffering what is ours to suffer, receiving in himself what is our due for our sins. We indeed deserve God to forsake us and to kill us. You may not think you’re all that bad but just remember our first parents brought upon this world all the evil you see and experience by simply eating a piece of fruit they were commanded not to eat. You’ve done worse. As our sins are laid upon our LORD Jesus Christ the sky darkens as our Father turns his back on him. He rejects Jesus because the sin of the world is now Jesus’ own. Jesus can feel it like perhaps none of us ever feels God’s departure from us, for he has always known the Father’s abiding presence.

So Jesus prays Psalm 22 which outlays everything that is unfolding before him; the mocking of the crowds, the distribution and gambling for his clothes, and his own condition. Yet, the Psalmist also prays with hope in that Psalm that God would not forget him. He prays with trust that God will vindicate him. Indeed, on the third day God did vindicate Jesus by raising him from the dead. Forty days later Jesus was vindicated as he ascended to the right hand of the Father. Our salvation had been won. The redemption of the world was made complete.  Because you follow Jesus and are his disciple you may experience the same things he did. The disciple is not above the master. You may suffer with Jesus and feel abandoned by God at times. Yet, because we are joined with Jesus in his suffering we too may pray with the same confidence that God would vindicate our faith in Christ Jesus. Do not think it strange if you suffer, especially for the name of Christ. But with the faith of Jesus put yourselves in the hands of the Father who loves you.

Almighty God and Father, you handed Jesus over to suffering and death for our salvation. Grant us faith in him so whether we suffer or are doing well, we place ourselves into your merciful care. In Jesus’ name we pray. Amen.