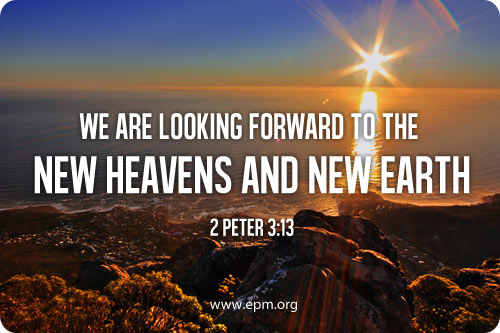 #DailyDevotion What Are You Looking Forward To?

Heb. 11:7By faith Noah, when he was warned about the things no one could foresee, respected God and built an ark to save his family, and by such a faith he condemned the world and became an heir of the righteousness that comes by faith. 8By faith Abraham obeyed when he was called to leave home and go to a place he would receive as an inheritance, and he left without knowing where he was going. 9By faith he lived as a stranger in the promised land, as though it belonged to someone else, and lived in tents with Isaac and Jacob, who had the same promise he had. 10He was looking for the city with foundations, the one God built and made. 11 By faith Sarah, even though she was too old, got the strength to have a child because she believed she could trust Him Who had promised. 12And so, although he had become physically unable to have a child, one man had many descendants, like the stars in the sky and the sand on the seashore that no one can count.

It didn’t look like the world was going to end in a flood. Yet the LORD told Noah it was going to happen. Noah believed that message and warned the world he lived in the flood was coming. He respected God and built an ark to save his family. While he warned the world, the world didn’t believe him. It didn’t believe God. Because of their lack of faith, the world perished. Only eight souls, Noah and his family survived the flood. Through this faith, not only did Noah and his family survive the flood, he became an heir of the righteousness that comes by faith. With such faith he lives and survives the second death which is to come.

But Abraham “was looking also for a city with foundations, the one God built and made.” This would be the New Jerusalem, the New Heavens and New Earth. Like the world that Noah survived but was destroyed by water, this world will be destroyed by fire. The Church warns the world of the upcoming doom and the second death. We also hold forth the promise of a new heavens and new earth where righteousness reigns. This city that Lord Jesus had promised Abraham is received by him and all who have the faith of Abraham. While Abraham certainly wanted a land for his descendants to grow and multiply on he also knew this world wouldn’t last forever. So he was looking for a country, a city that God built. Jesus Christ the Lord is the foundation stone of this city. This city lasts forever.

Sarah too, while she may have laughed believed the one who promised she would have a child. She believed she could trust the one who had promised. At the time the LORD said she would have a child she did. By the time the Israelites came up out of Egypt the LORD had fulfilled his promise concerning the number of descendants Abraham would have. But that isn’t good enough for the LORD Jesus Christ. So the LORD gave us who would have the faith of Abraham to be his heirs and descendants also. It is written, Rom 9:7-8  “and not all are children of Abraham because they are his offspring, but ‘Through Isaac shall your offspring be named.’  (8)  This means that it is not the children of the flesh who are the children of God, but the children of the promise are counted as offspring.” Gal 3:7-9 “Know then that it is those of faith who are the sons of Abraham.  (8)  And the Scripture, foreseeing that God would justify the Gentiles by faith, preached the gospel beforehand to Abraham, saying, “In you shall all the nations be blessed.”  (9)  So then, those who are of faith are blessed along with Abraham, the man of faith.” Through faith in Jesus your are Abraham’s.

Merciful God and Father, grant that we may believe the promise of your son Jesus Christ and become heirs of Abraham and receive the city he was looking for. In Jesus’ name we pray Amen.