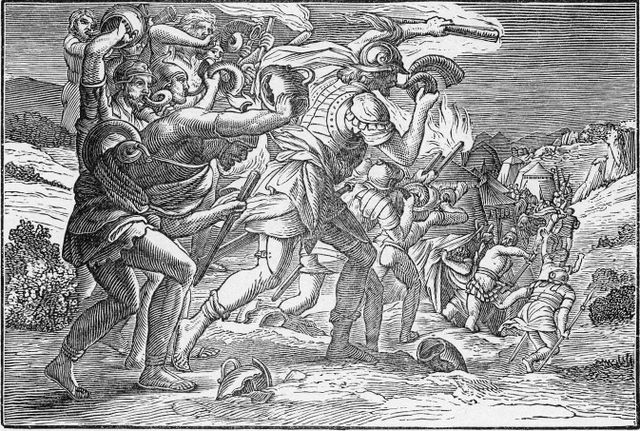 #DailyDevotion We Are In Spiritual Warfare, But Jesus Fights The Battle For Us

There are many who attempt to lay out how good a battle planner Gideon was by whom he eliminated from his army. Some will even try to say those who lap water are better soldiers than those who knelt. But the fact of the matter is the Lord is the one who determined who was in the army and not based on the facts of who would have been a better soldier. No the Lord eliminated down to a workable size in which no one could claim it was anything or anyone but the Lord who handed the victory over Midian to Israel.

Indeed not a single sword was used by Gideon’s army to win the battle. Gideon had 300 men with horns and pottery. It was Midian’s swords who cut one another down. Eventually men of Israel captured the fleeing army and kings and then they cut them down. The battle was the Lord’s.

How often then do we who call ourselves Christians do not believe the Lord is fighting on our side. Jesus is our King, our General. Jesus is the one who fights our battles for us. He does his best work on winning us the victory when we are at our weakest point. Yet how often do we give up and give into fear and sin not trusting the Holy Spirit to give us the power to overcome our fear and sin? Far too often I would believe.

But when we are feeling the battle in the spiritual realms coming down upon our heads we need to kneel in prayer. Consider even laying prostrate before Jesus and call upon his name. Act as if Jesus has heard your prayer for help and give thanks for Jesus indeed has promised to hear us and answer our prayers that are prayed with faith in his name and at his commands. We approach life so badly most of the time because we believe it’s really all up to us. But it isn’t up to us. It’s up to Jesus. We simply need to trust him and then live the life he has instructed us to live in his Name. Our whole outlook and attitude on life will then be one of faith and not fear,
trust and not sin, love and not hate.

Lord Jesus Christ you have promised to give us the victory over sin, death and the power of the devil. Grant us such faith that we turn our lives over to your care and trust that you will do for those things which are necessary for this life and the next. Amen.