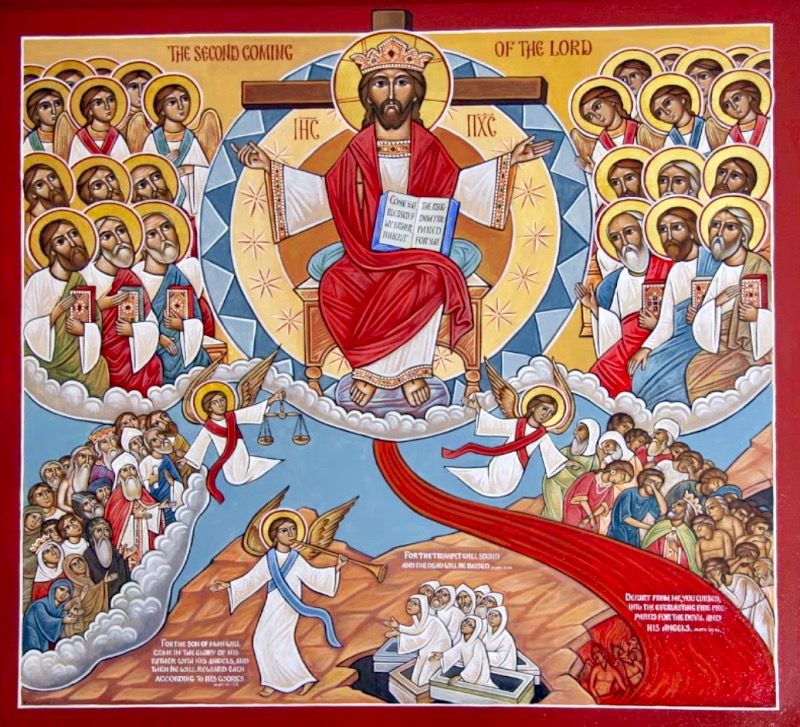 Mark 1324“Now, after the misery of that time the sun will turn dark, the moon will stop shining, 25and the stars will be falling from the sky. And the powers of heaven will be shaken. 26Then people will see the Son of Man coming in the clouds with great power and glory. 27And then He will send the angels and gather His chosen ones from the north, south, east, and west, and from one end of the world to the other…32“No one knows about that day or hour, not the angels in heaven, not the Son, only the Father. 33Be careful and watch, because you don’t know when it will happen. 34It’s like a man who went on a trip. As he left home, he put his slaves in charge, assigned work to everyone, and ordered the doorkeeper to watch. 35Watch, then, because you don’t know when the master of the house is coming, whether in the evening, at midnight, at the time when the rooster crows, or early in the morning. 36Make sure he doesn’t come suddenly and find you asleep. 37What I tell you, I tell everyone: ‘Watch!”

The image Jesus is giving us is from Daniel 7, 13“In the visions during the night I saw One coming with the clouds of the heavens like the Son of Man, and He came to the Ancient of Days and was presented before Him. 14And He was given glory, power to rule, and a kingdom, so that all peoples, nations, and those of every language should serve Him. His authority is everlasting and will not pass away, and His kingdom is one that will not be destroyed.” Revelation 1 also says, 7“Look, He is coming in the clouds, and every eye will see Him, even the men who pierced Him, and all the people on earth will mourn over Him. So it will be. Amen.”

Jesus and his angels will first root up all that is wicked in the world as in the parable of the wheat and the tares from Matthew 13. Then he will raise from the dead all those who believed in him first and then those who are still living he will transform from one end of the earth to another. (1 Cor. 15, 1 Thess. 4)

Much about that day will be like the day of his crucifixion for it will be a day of judgment. The Sun will turn dark, the moon will look as blood, stars will be falling from the sky and the powers of heaven will be shaken. All authority in heaven and on earth and under the earth will be makes subject to Jesus. The old order will pass away and a new order under Jesus and the Church will be established.

But we don’t know when this is going to take place. All the signs have been in place throughout the time of the Church, most especially since the fall of Jerusalem. It is as Jesus says, “It’s like a man who went on a trip. As he left home, he put his slaves in charge, assigned work to everyone, and ordered the doorkeeper to watch.” So we are to keep watch. Watch for Jesus. Watch over yourselves. You don’t want to found asleep in a stupor of sin. Rather be faithfully remain awake by trusting in Jesus, taking advantage of the means of grace (baptism, absolution, the Supper, preaching of the Word, and mutual Christian edification), fighting against your sinful inclinations and loving your neighbor.

Heavenly Father, Jesus has warned us to remain awake and watch for his coming. Grant us your Holy Spirit that we may faithfully watch for him and not be found sleeping at this revelation. In Jesus’ name we pray. Amen.