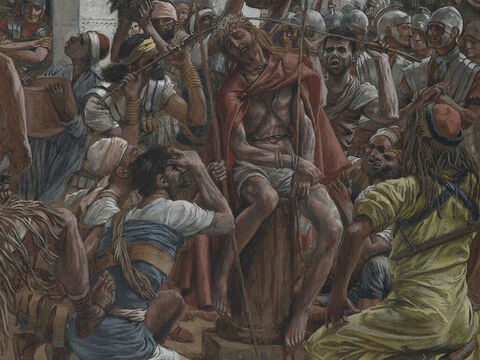 5Think just as Christ Jesus thought: 6Although He was God, He did not consider His being equal with God as a prize to be displayed, 7but He emptied Himself, made Himself a slave, became like other human beings, 8and was seen to have the ways of a man. He became obedient and humbled Himself until He died, yes, died on a cross.

Think as Christ Jesus thought. That is a mouthful. What does it mean? Can we lowly humans even begin to make a start of it? Well if we could actually think of ourselves as lowly humans we have made a good start of it. Chances are we’ve been built up so much by self-esteem programs it may be more difficult than it sounds.

Well how did Christ Jesus think? Here we see his glorious humiliation described which we often refer to in the creeds starting with his conception and ending in his burial. Jesus, although he was God—yes first we need to grasp that Jesus Christ is God from all eternity, always having been exalted on high, Holy, Holy, Holy, LORD God of Sabaoth! This LORD did not consider his being equal with God  as a prize to be displayed. He did not grasp or strain to take hold of what is his naturally and by right.

What did Jesus do? Here is a wonderful spot to ask this question. He emptied himself, made himself a slave and become like other human beings. Yes, conceived by the Holy Spirit in the womb of the Virgin Mary, God humbled himself to become like us in every way excepting sin. He had to nurse at his mother’s breast, a helpless babe. He had to ask questions, grow in wisdom and learn like us. He was obedient to his parents to the authorities who ruled over the places where he lived. He was seen to have the ways of a man because he was and still is a man.

Jesus became obedient and humbled himself until he died, even died upon a cross in shame. This Jesus did in obedience to God his Father’s will and this he did to save you. He only thought of you and what was best for you in his humiliation. He knew if he served you like this then salvation would be won for you. In service to you he became the atoning sacrifice for your sin and propitiated the wrath of God having taken it into himself. He took your shame, your guilt, your iniquities, your sin, your rebellion, your punishment and your death upon himself and felt ever single bit of it in service to you.

So how do you think as Christ Jesus thought? You think how can I do good to those around me, even my enemies. What sacrifices can I make to make other people’s lives better? It’s not an easy thing to do at times. It may feel like you’re dying and being crucified. You may feel humbled because well, you have humbled yourself to think of others more than you think of yourself. That is what Paul is asking you to do, to treat others as Jesus has treated you.

Heavenly Father, we do thank you for sending your Son Jesus Christ to humble himself to become like us and in our flesh to make peace between you and us. Grant us faith and the Holy Spirit that we may think as he thought and humble ourselves to love others as Christ Jesus loved us. In Jesus’ name we pray. Amen.