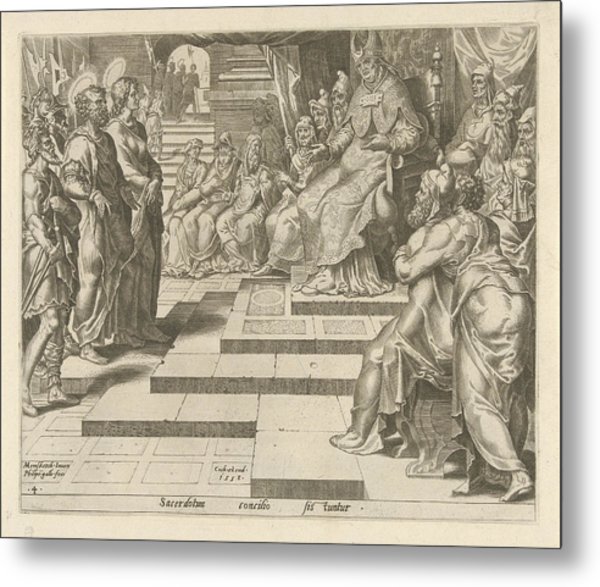 Acts 4:5-12 5The next day their rulers, elders, and Bible scholars met in Jerusalem 6with Annas the high priest, Caiaphas, John, Alexander, and all the others of the high priest’s family. 7And they had the two men stand before them. “By what power or name did you do this?” they asked. 8Then Peter was filled with the Holy Spirit. “Rulers of the people and elders,” he said to them. 9”if we’re questioned today about helping a crippled man, how he was made well, 10all of you and all the people of Israel should know this man stands healthy before you by the name of Jesus Christ from Nazareth, Whom you crucified but God raised from the dead. 11He is the Stone rejected by you builders and has become the Cornerstone. 12No one else can save us, because in all the world there is only one name given us by which we must be saved.”

Remember they were imprisoned at the Temple, i.e. Peter and John. Hence we see the high priest and his family coming out to judge them. They question them, “By what power or name did you do this?” Now we should remember Jesus’ promise to his disciples, Luke 12, 11“When they bring you before synagogues, rulers, and authorities, don’t worry how you will defend yourselves or what you will say. 12When that time comes, the Holy Spirit will teach you what to say.” In accordance with this promise Peter is filled with the Holy Spirit and begins to speak.

Peter points them and us to Jesus Christ from Nazareth. The man and the name that was hung upon the cross on Calvary. It is by his power and his name this man, whom they all knew who begged regularly at the temple gates because of his infirmities was made well (Greek σεσωται, σώζω to save). I give you the Greek here because is being translated as “made well” which is a good translation. The word though in verse twelve (be saved) is the same Greek word. Salvation is not just sins forgiven. It is not just being raised from the dead. It is being made whole as well, i.e. if our sins are forgiven us that has effects not only spiritually but physically. You may remember Adam died the day he rebelled against the LORD and ate the fruit. First his soul died, later his body died as an effect of sin. Now we are healed, sozo, spiritually first then at the resurrection, bodily. Peter though interjects the sozo, salvation and heals the guys on the steps of the temple.

Peter witnesses to the murderers of Jesus Christ of Nazareth that God had raised this Jesus from the dead in fulfillment of Psalm 118:22. Jesus confessed this would happen in the three synoptic Gospel (Matthew, Mark and Luke). Paul confesses this truth in Ephesians and Peter mentions it again in his epistle. Peter tells them this to give them the chance to repent as he did the other Jews earlier. Now Peter boldly proclaims, “12No one else can save us, because in all the world there is only one name given us by which we must be saved.”

Peter is equating Jesus Christ of Nazareth to God here. The name of the LORD (YHWH) is Jesus Christ. His name alone gives physical salvation. His name alone gives eternal salvation, the forgiveness of sins. It is the Father’s will that every knee bow and every tongue confess that Jesus is LORD (YHWH) and him alone does he give salvation. This name of Jesus of God gives, the Church gives freely to all who would receive it and escape eternal perdition and enter into the kingdom of God.

Heavenly Father, we thank you for the name of Jesus in which we have total and complete salvation. Grant us faith always in this name and put it on our lips that we may share this salvation. In Jesus’ name we pray. Amen.