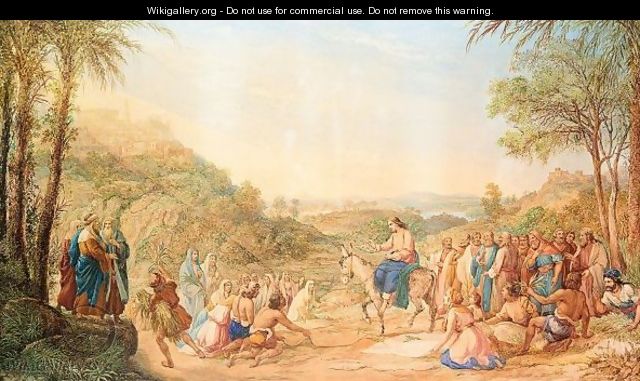 #DailyDevotion The World Is Running After Jesus

John 12:17-19 17The people who had been with Him when He called Lazarus out of the grave and raised him from the dead were telling what they had seen. 18Because the crowd heard He had done this miracle, it came to meet Him. 19Then the Pharisees said to one another, “You see, you’re not getting anywhere. Look! The world is running after him.”

Lazarus must have been a pretty popular person. There must have been a lot of people at the tomb of Lazarus on the fourth day of Lazarus’ death when Jesus came to the tomb to raise Lazarus from the dead. These people became Jesus’ evangelist for the day when he came into Jerusalem. They were telling everyone how Jesus had raised Lazarus from the dead.

Yet not everyone believed in Jesus despite this miracle. The Pharisees said, “You see, you’re not getting anywhere. Look! The world is running after him.” It is as Jesus said in the parable of Lazarus and the rich man, Luke16 30 “’No, Father Abraham’, he said, ‘but if someone comes to them from the dead, they’ll repent.’ 31‘If they don’t listen to Moses and the prophets,’ he answered him, ‘they won’t be convinced even if someone rose from the dead.’” They didn’t ironically believe even though Lazarus was raised from the dead. They did not believe when Jesus was raised from the dead, and they knew it was true. You will run across people like this in your life. Do fear them.

The Pharisees were correct. The world is running after him. You may not see it where you are. Yet in country after country, those who belong to Jesus are hearing his good news and coming out to meet him with shouts of “Hosannas!” Do not fear the people around you, your own countrymen are rejecting the message. We are in a temporary exile. This is not our home. The kingdom Jesus promised us when he returns is our home. Nevertheless, we continue to spread the good news here and people are still coming to the faith and it is with these people we heartily rejoice with.

Heavenly Father, grant us faith to believe in the resurrection and be fellow witnesses with your apostles of that resurrection so through that message the world may continue to run after Jesus. In Jesus’ name we pray. Amen.