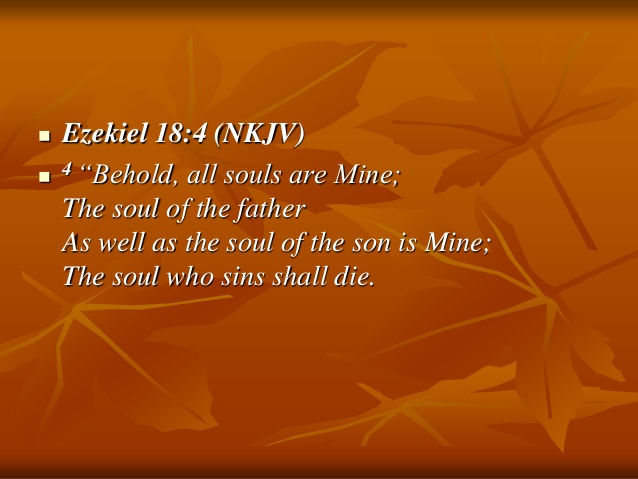 #DailyDevotion The Soul That Sins Will Die

Ezekiel 18 The LORD said to me: 2“What do you mean when you use this saying in the land of Israel, ‘The fathers have eaten sour grapes, and the children’s teeth feel numb? 3As I live, says the Lord GOD, you will certainly not use this saying anymore in Israel. 4All persons belong to Me, so a son and father are alike to me. The one who sins will die.

So apparently the Jews had this saying. It basically means the children suffer for their parents sins. The LORD was not happy with it. There was some basis for this thinking in Israel because of what the LORD said in Exodus, 206“I punish the children for their fathers’ sins, if they hate Me, to the third and fourth generation, but I am kind to thousands of those who love Me and do what I order.” But I guess we must ask in what manner is this carried out? It would seem that it is carried out in temporal terms. Children see the bad behavior of their parents and they follow them in their sins. The parents bad behavior has temporal consequences which the children suffer for as well, because they are dependent upon the parents. Ezekiel when he writes this is in Babylon in exile because of sins of the inhabitants of Judah, they worshipped idols and did not love their neighbor. Some of exiles had committed these sins and others who maybe not as overt or at least did not condemn the sins of their neighbors were carried away in exile as well.

Yet, the LORD says, 3“As I live, says the Lord GOD, you will certainly not use this saying anymore in Israel.” The LORD wants to clear up this understanding the Jews have about their God. He tells them, “All persons belong to Me, so a son and father are alike to me. The one who sins will die.” He does not punish with eternal death those who are not guilty of sins. No, the one who sins will die. He spends a number of verses which our Sunday lesson will not read detailing the sins they were guilty of, idolatry, sexual sins, harsh treatment of the poor,  and the rest of the Torah. He tells us quite explicitly, 20“A righteous person is credited for his righteousness, and a wicked person suffers for his wickedness.”

Yet we know there is no one who is righteous, no not one. Everyone sins. Yet temporally the LORD is going after the one who continually sins against him. He is not going after the children who do not follow in the path of their father or mother. Temporally, we all die because we all sin. But what happens afterwards? There are two options, eternal life and eternal death. How can we escape from eternal death knowing we have sinned and deserve as much?

God has provided us an escape from our sins, Jesus tells us in John 316“God so loved the world that He gave His only-begotten Son so that whoever believes in Him would not perish but have everlasting life.” Paul tells us in Romans 35“But if instead of working you believe in Him Who declares the ungodly righteous, your faith is counted as righteousness.” So we who hear the promise that Christ Jesus has saved us from our sins are declared righteous, not guilty, innocent and righteous on account of the faith we have in Jesus our LORD. Instead of everlasting death for our sins we gain eternal life for our faith in him.

Heavenly Father, though our sins are great and we deserve no good thing from you, grant us faith in your son Jesus Christ, the LORD, so that we may not be punished eternally for our sins, but instead pass into eternal life for his sake. In Jesus’ name we pray. Amen.