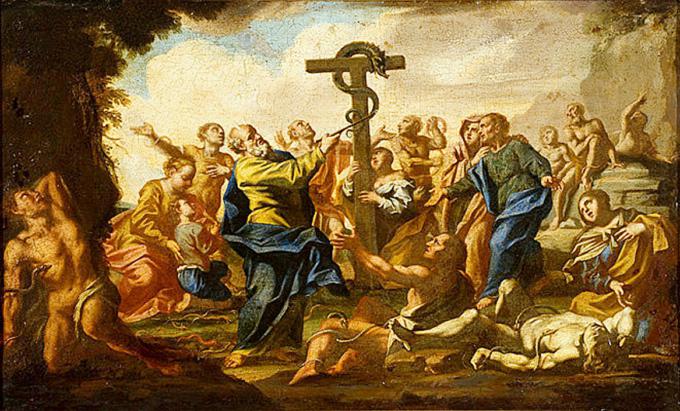 Numbers 21:6-9  6So the LORD sent poisonous snakes among the people. They bit the people, and many in Israel died. 7The people came to Moses. “We’ve sinned,” they said, “by talking against the LORD and against you. Pray to the LORD to take the snakes away from us.” Moses prayed for the people. 8“Make a snake,” the LORD told Moses, “and put it on a pole. When anyone who is bitten looks at it, he will live.” 9Moses made a bronze snake and put it on a pole. When a snake bit a man, he looked at the bronze snake and stayed alive.

The Lord disciplines his children. They grumbled against him and so he sent them snakes to bite them and to kill them. Many of those people died. Seeing this, those who didn’t die repented. They cried out, “We’ve sinned by talking against the LORD and against you. Pray to the LORD to take the snakes away from us.” Even though the people had spoken against Moses, Moses went and prayed to the LORD for relief. David in Psalm 145 writes, 8“The LORD is gracious and merciful, slow to get angry and great in kindness.” So what does the LORD do? He accepts Moses’ intercession and has him make a bronze serpent and put it on a pole. If a snake bit someone, that person would then look at the bronze snake and live. It was quite a thing. You had to look at the thing causing your death, believe the promise and then you wouldn’t die. Hezekiah would later destroy the bronze serpent because people were worshipping it. (2 Ki. 18:4)

Now, you and I have sinned against the LORD in what we think, say and do. Because of our sins, we deserve to die, not just a temporal death but an eternal death in the Lake of Fire. Have we cried out like the Israelites for help from God? I imagine sometime we may have when the particular sin gets us in enough trouble. However, we are often only wanting temporal relief. The LORD, the God of heaven and earth before we ever were repentant was gracious and merciful to us.

Paul tells us, “What the Law, weakened by the flesh, could not do God has done by sending His Son to be like sinful flesh and to be a sacrifice for sin.”(Rom. 8:3) Again Paul says, “God made Him Who did not know sin to be sin for us, so that in Him we would have the righteousness of God.”(2 Cor. 5:21) The Father lifts Jesus us on the cross as Moses did the bronze serpent. There we see our sin and what it deserves as we look at Jesus. His being pierced upon the cross draws us to him as it brings us peace and spiritual healing with and from God.

We may note, the LORD did not take the serpents away from the Israelites. As long as they were in the wilderness the snakes still bit them and they had to look at the bronze serpent and live. We too, still have this sinful flesh which causes us to sin. St. Paul writes, “To keep me from feeling proud because such wonderful things were revealed to me, a thorn was put into my flesh, Satan’s messenger to plague me and keep me from feeling proud.”( 2Co 12:7) Because we still feel the serpents bite Jesus has left us in the mouths of his pastors the words of absolution. We still need regular healing from our sins and so Jesus gives us his body and blood in supper for the forgiveness of sins and the strengthening of our faith. He is gracious and merciful.

Gracious and Merciful Father, even as you gave the bronze serpent to heal your people Israel, you have given us your Son Jesus Christ. Grant us faith to always look to him in his gifts so we will not die eternally, but be healed by those gifts and live eternally with you in your kingdom. In Jesus’ name we pray. Amen.