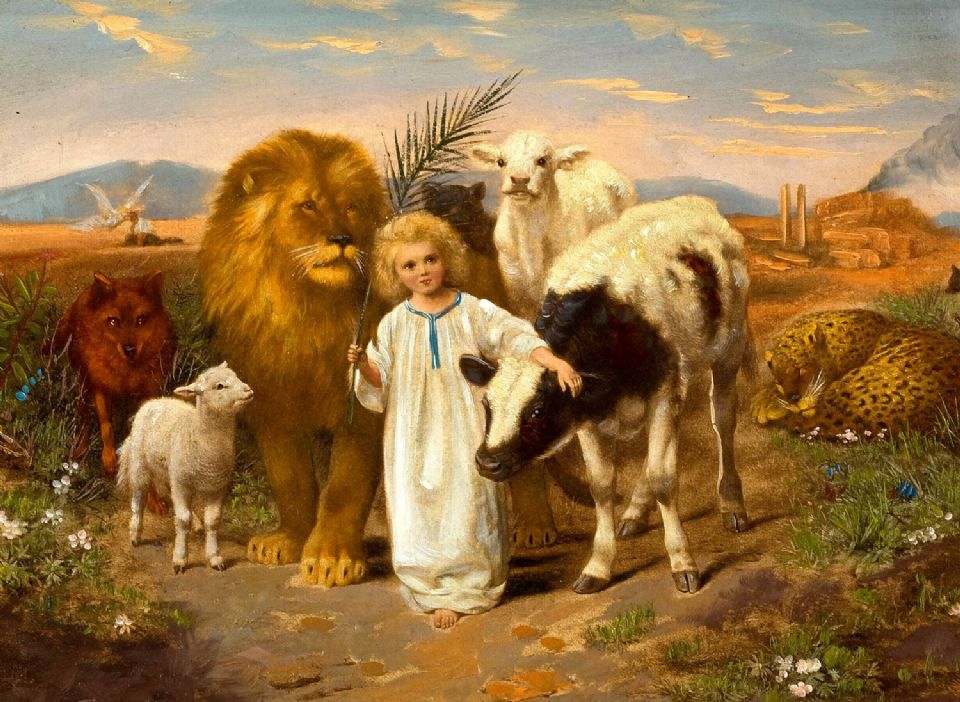 #DailyDevotion The Root Of Jesse Is Jesus

Isaiah 11 6A wolf will live with a lamb; a leopard will lie down with a goat; a calf, a young lion, and a fattened animal will be together, and a little boy will lead them. 7A cow will feed with a bear; their young ones will lie down together; a lion will eat straw like a cow. 8A nursing child will play over the hole of a cobra; a weaned child will put his hand over the opening of a viper. 9They will not hurt or destroy anyone on all My holy mountain, for the world will be full of the knowledge of the LORD like the waters covering the sea. 10At that time Jesse’s Descendant will stand as a flag signaling the people. The nations will come to Him for help; His resting place will be glorious.

The future here that Shoot of Jesse will usher in seems quit idyllic or Edenic. In the Garden and even before the Flood, man had no fear of animals and animals apparently no fear of man. They were all given the plants to eat so there was no fear of one another. So wolves and lambs, leopards and goats, calves and lions, and children will just get along. The viper and cobra would be the play things of infants. If this is exactly what things will be like or if the LORD is just trying to get us to understand the nature of the New Heavens and New Earth a the time of the Messiah’s visible reign is not known, but you can always be safe with the literal words here. In any case verse 9 is the controlling feature I believe, “They will not hurt or destroy anyone on all My holy mountain, for the world will be full of the knowledge of the LORD like the waters covering the sea.”

At that time the world will be full of the knowledge of the LORD. You see we lost that in the Fall. St. Paul tells us to “put on the new self, which is continually renewed in knowledge to be like Him Who created him.” At that time we will be completely renewed in knowledge to be like Him. As in Isaiah 2:4 and Micah 4:3, “Then they will hammer their swords into plowshares and their spears into pruning hooks.. No nation will raise a sword against another or train for war anymore.” Such is the result of having the true knowledge of the LORD as opposed to the option we chose in the original garden, the knowledge of good and evil. The better we know the LORD in this life, the less need there is for us to be worried about what we don’t have or getting what we want because we know in the LORD we have all things.

Verse 10 then like the other bread slice of a little sandwich we have here. In verse 1 we have the Shoot of the stump of Jesse. Now we have Root of Jesse, translated “Jessie’s Descendent” brought to the fore. Root is the actual Hebrew word. It indicates the source and the life of something. Now how can something we a root and shoot? Kind of like when Jesus ask the question, how can David’s son be David’s Lord when he says, “The LORD says to my Lord, sit at my right hand.” It is because the Root and the Lord is the LORD, the LORD the Living God, Creator of Heaven and earth. So we have the Messiah here being the New David, the Shoot, True Man and the Root, True God.

Now here is the other amazing things, he set as a standard, as a flag to the nations, which is another way of saying he is going to be crucified. The cross of Jesus is the rallying flag of the nations. It calls God’s people from every language, nation, people and tribe to rally around it against the forces of darkness.

Lord Jesus Christ, O Righteous Root and Shoot of Jesse, may your cross rally us into your eternal kingdom now and at your revelation. In Jesus’ name we pray. Amen.