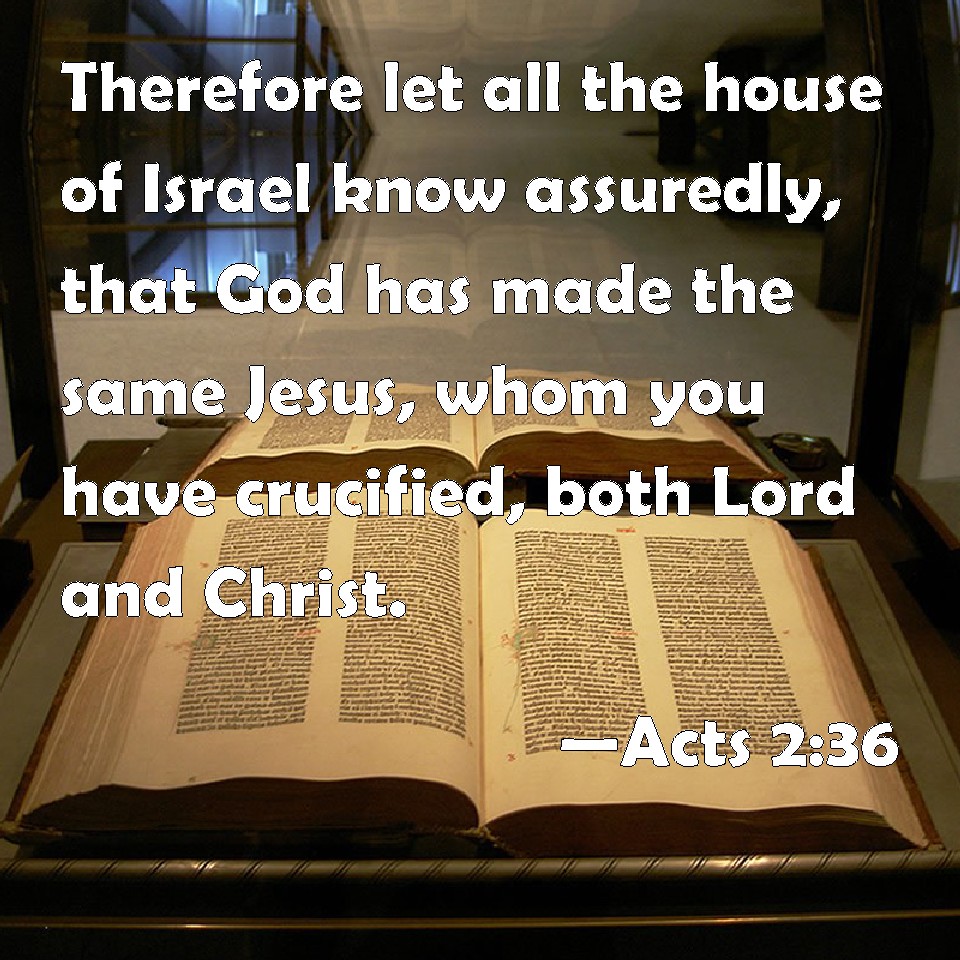 Acts 2:30-36 31David saw what was ahead and said the Christ would rise again: He was not deserted when He was dead, and His body did not experience decay. 32 God has raised this Jesus — we’re all witnesses of that. 33Lifted up to God’s right hand and receiving from the Father the promised Holy Spirit, He has poured out what you see and hear. 34David didn’t go up to heaven, but he says: ‘The Lord says to my Lord, “Sit at My right 35until I make Your enemies Your footstool.” 36“Then all the people of Israel should know it’s true that God made Him Lord and Christ — this Jesus Whom you crucified.”

Peter continues with his sermon with the fact that David saw what was ahead and that the Christ would rise again. This is one of the most central teachings of Christianity. So much so Paul says in 1 Cor. 15, “If Christ is not risen you are still in your sins.” Jesus must rise from the dead and he did rise from the dead. He rose bodily from the dead, “Touch me and see I am flesh and bone,” “Give me some of that fish to eat.” David saw the Messiah would not experience decay. This is why it is important he rose on the third day. You might remember, Lazarus who was raised 4 days after his death, was thought to be decomposing by that point (and he was until Jesus raise him from the dead).

Now, not only is Jesus risen from the dead but he has ascended to the right hand of the Father. There he has received the Spirit whom he poured out on all flesh. Having been poured out on all flesh, the Spirit is working on people everywhere to believe the good news of Jesus Christ. He is preventing the devil and his minions from deceiving us any longer. If we reject Christ it is our own doing. The Spirit goes out with the Word of Christ, the forgiveness of sins in Jesus’ name, baptism, the Supper, absolution, preaching of what Christ Jesus has accomplished and converts people from unbelief to faith.

At the right hand of God Jesus intercedes for us and for his whole Church. There he rules as he awaits for all things to be placed under his feet on the Last Day. We should have no doubt concerning Jesus’ victory and subsequent ruling over all creation and putting down Satan, his minions, sin, death and all those who reject his gifts.

Peter then closes his sermon with repeating what he had said earlier, you crucified Jesus. We know that pierced their hearts particularly when it follows, “God has made him Lord and Christ.” Lord here is probably in the sense of king as he is already LORD according to his divine nature. But now, in the flesh, according to his flesh Jesus is Lord and Christ, the anointed one of the Father. Put your faith in him. There is no salvation in any other name but Jesus.

Heavenly Father, grant us your Holy Spirit that we may believe you raised Jesus from the dead conquering sin, death and the devil so we too with him may be raised from the dead to eternal life when he ushers in his visible kingdom. In Jesus’ name we pray. Amen.