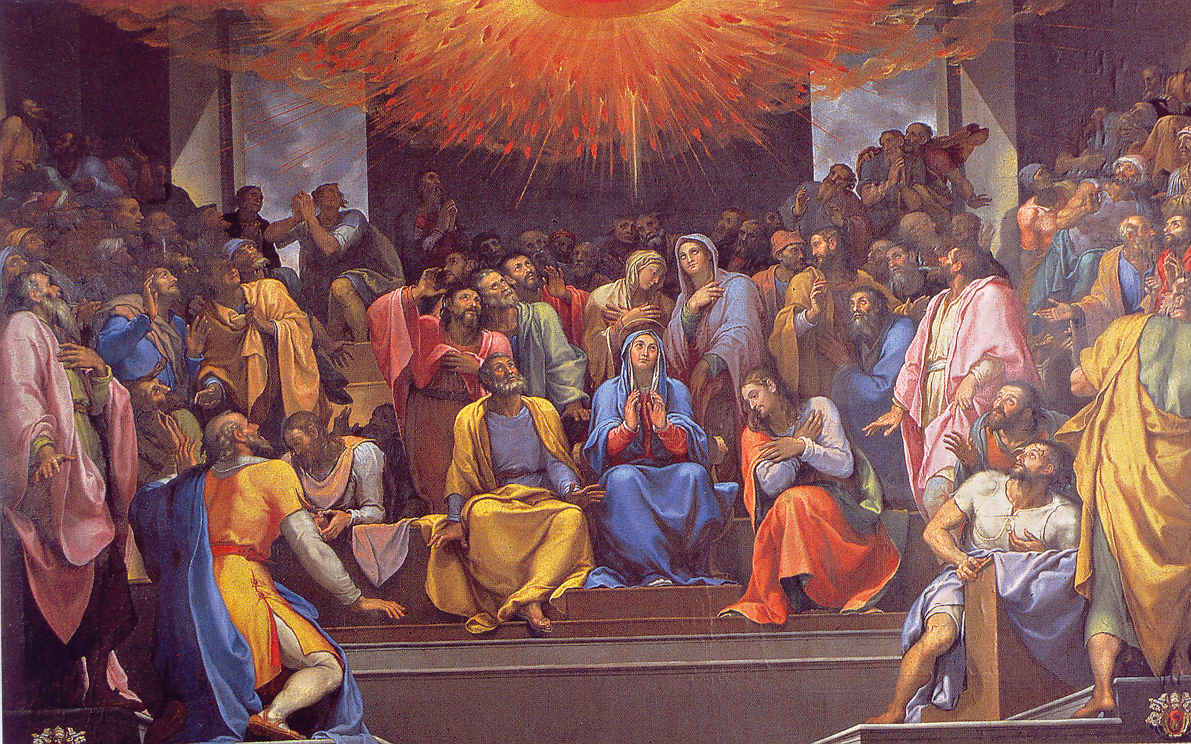 #DailyDevotion The Old Is Completed In The New

Act 1:12-14  Then they returned to Jerusalem from the mount called Olivet, which is near Jerusalem, a Sabbath day’s journey away.  (13)  And when they had entered, they went up to the upper room, where they were staying, Peter and John and James and Andrew, Philip and Thomas, Bartholomew and Matthew, James the son of Alphaeus and Simon the Zealot and Judas the son of James.  (14)  All these with one accord were devoting themselves to prayer, together with the women and Mary the mother of Jesus, and his brothers.

Jesus had ascended to the right hand of the Father. He had instructed his apostles to go back to Jerusalem to wait for the Holy Spirit whom they would receive from on high in ten days. So they did as they were told. While there they gathered together in a large upper room, we’ll see there were one hundred and twenty persons gathered together, they devoted themselves to prayer. The women who supported them during Jesus’ visible ministry and Jesus’ mother and brothers were part of that crowd.

There are perhaps three things we can get from this bit of scripture. One is they were of one accord. They had one mind, one confession of faith. They were not divided by teaching or by purpose. Perhaps we need to repent more of the sad divisions that exist among us Christians. Not that we should just ignore the differences; those differences can be the difference between eternal life and eternal damnation. We should though always be ready to examine what we teach, believe and do to make sure it is truly in accord with the word of God and if such differences are truly false teaching or just mere opinions and practices of men. Where differences don’t amount to false teaching or practices based on false teaching we should recognize we are truly of one accord. We should also be willing to talk with those who confess Christ but believe and teach differently to bring about a true united confession of faith that is faithful to God’s word. Let us not let the devil try to separate us on things that do not matter.

As a result of being of one accord they prayed. Yes unity in mind, spirit and teaching has the fruit of united prayer. When we are of one mind, one accord, one confession of faith, we can be united in what we pray for. One thing we should all be able to pray for is our sad divisions cease. We also pray for the conversion of the world. We pray for more pastors, evangelists and missionaries. We pray for the opportunity to share the word of Christ and that those who hear it, they hearts will be opened to hear, listen, and believe it. We pray for the perseverance of the saints, that we will not fall away under pressure, even torture.

Thirdly, we can see in this passage, which will be more developed later in this passage that the church mirrors and fulfills the Old Testament Church. The Church of the Old Testament had as its foundation the twelve patriarchs. The Church of the New Testament is founded upon the foundation of the twelve apostles. Yet, because of Judas’ falling away there were not only eleven.  Someone would need to replace him. It is interesting that the list of the tribes of Israel in Revelation the tribes of Dan and Ephraim have been replaced with Manasseh and Joseph; Ephraim probably because its leaders lead the northern tribes astray into idolatry, Dan perhaps because they were the most northern tribe which held one of the idolatrous temples for the Israelites there. So in similar fashion we should see the fulfillment of the Old Testament Church in the New Testament Church in which all of Scripture is completed and made perfect.

Heavenly Father, grant us, the Church of your Son Jesus Christ, one accord and mind so that our sad divisions would cease so that we may all pray with one accord the salvation of the world, the perseverance of the saints and be raised up with Christ on the day of his return as one holy Christian Church. In Jesus’ name we pray. Amen.