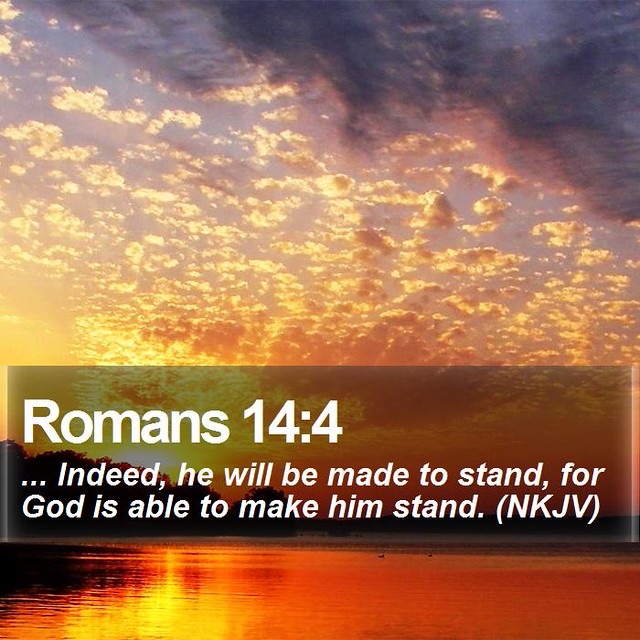 #DailyDevotion The LORD Will Make Our Fellows Succeed

Romans 14 Welcome a man who is weak in his faith and not just to argue about different opinions. 2One person believes he can eat anything, but a weak Christian eats only vegetables. 3If you eat, don’t despise anyone who doesn’t eat, and if you don’t eat, don’t criticize anyone who eats, because God has accepted him. 4Who are you to criticize someone else’s servant? He belongs to the Lord, Who is concerned whether he succeeds or fails. And he will succeed, because the Lord can make him succeed.

Sometimes we can get caught up in the Church over things that matter and things that really don’t matter. Yet, I guess the problem we have is determining what matters and what doesn’t matter. Sometimes those who think something really does matter can find some justification for what they are doing in the Bible while another person looks at the same passage and sees nothing.

Then there are those cases where the Bible really is silent on a point but a person’s scruples will not or cannot let them do something where another person feels perfect freedom in doing it. Both of these things can drive divisions in the Church of Jesus.

Paul brings up a couple of things here. One person thinks they can eat anything and another person eats only vegetables. Mark writes in chapter seven Jesus made all foods clean. Certainly the person who read this and eats what he likes has read this correctly and is living his life as he should. My best guess is the person who eats only vegetables is perhaps looking to Genesis chapter one or maybe reading Daniel and thinking since Christ has taken the curse upon himself we should go back to eating vegetables only. They would be wrong, but I can see a Christian thinking that. Then there are those people who completely ignore what Jesus did in Mark and follow the Mosaic food laws.

Paul tells us to accept one another in these things. He tells us not to condemn the person who eats or the person who does not eat. God has accepted both as his children and servants. What matters is Romans chapters 1-11. I guess it would matter if one was telling the other they had to do what they do in order to be saved. That would oppose everything Paul wrote in the earlier chapters. But as to how God wants us to live out our life of faith in loving one another, there is considerable freedom. God is concerned with whether each person called by his name succeeds or fails. He will bring us all to the point of the freedom we have in Christ. Paul tells us the LORD Jesus Christ will make him succeed.

If it is the LORD Jesus Christ who will makes us all succeed in following him and in loving one another, completing our work of faith until death, Paul says not to criticize our fellow Christians in things that do no conflict with the doctrine of salvation as he has presented it in the previous chapters. If they are incorrect, the LORD is responsible to bring them to the place of his peace and freedom. If their scruples will not allow something, they are correct for themselves. If your scruples allow something, you are correct concerning yourself. We put ourselves and one another into the hands our merciful, kind and forgiving LORD Jesus Christ.

Heavenly Father, give us wisdom in reading the scriptures, determining your will for us in our lives, and patience as we look at the lives at our fellow servants in Christ. Lead us into all truth. In Jesus’ name we pray. Amen.