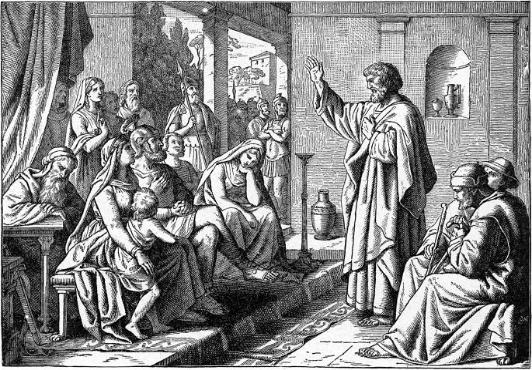 #DailyDevotion The LORD Really Wants All People To Be Saved

Acts 10:44-48 44While Peter was still speaking, the Holy Spirit came down on all who heard the Word. 45All the Jewish believers who had come with Peter were surprised the gift of the Holy Spirit had been poured out also on people who were not Jews. 46They heard them speaking in other languages and praising God. 47Then Peter asked, “Surely no one can refuse water and keep them from being baptized, can he? They have received the Holy Spirit just as we did.” 48And he ordered them to be baptized in the name of Jesus Christ.

The Jews who were with Peter were surprised the Spirit came upon people who were not Jews. It’s as if they didn’t hear when Peter quotes Joel 2:28, 29 on Pentecost, “I will pour out My Spirit on all people, and your sons and your daughters will speak My Word. Your old men will have dreams, and your young men will see visions. And even on men and women who are slaves, I will pour out My Spirit in those days.” Did they think Peter or the LORD meant only Israelite flesh? Did Peter himself not understand this at the time? Apparently not.

But Peter most certainly understood it now. Now Peter says, “Surely no one can refuse water and keep them from being baptized, can he? They have received the Holy Spirit just as we did.” What does this mean? It means the Holy Spirit normally would have been given with baptism into Jesus. The outward pouring of the Spirit without baptism was a sign the people were accepted by God. The reception of the Holy Spirit through the laying on of hands by the Apostles was a sign of their authority. The normal course of the Spirit’s work would be to give the Holy Spirit when a person was baptized into Christ.

Since this was the case, and the LORD Jesus Christ commanded the Church to make disciples of all nations baptizing and teaching them everything he had commanded them, since these Gentile already received the gift the Holy Spirit, they still should baptized as Jesus desired of all his disciples so they would be joined to him and have the guarantee of all his promises he wanted them to have. We should realize from these extraordinary circumstances God may choose do things as he pleases and when he does, we should accept that but also return to the ordinary means he has given us and expect him to act as he normally would. So it is the Church ordinary action in making disciples that they would be baptized into Christ and by this baptism believe the Lord of Life has joined them to himself and given them his Holy Spirit, received the forgiveness of their sins and been made children of God.

Heavenly Father, ever through your Word and Sacraments, give us your Holy Spirit that we may believe in Jesus Christ, be born of your will from above and live out our lives according to your good will and purpose. In Jesus name we pray. Amen.