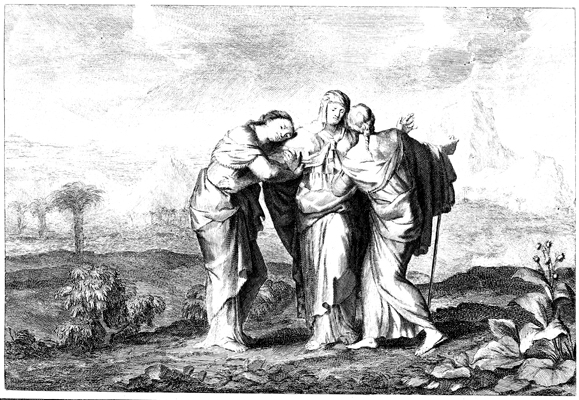 #DailyDevotion The Lord Providence Provides Despite Our Sin

Ruth 1 In the days when the judges were ruling, there was a famine in the land. Then a man from Bethlehem in Judah went to live for a while in the country of Moab, he, his wife, and his two sons. 2The man’s name was Elimelech, his wife’s name was Naomi, and the names of his two sons were Mahlon and Chilion. They were descendants of Ephrathah from Bethlehem in Judah. They came to the country of Moab and lived there. 3Then Elimelech, Naomi’s husband, died, and she was left alone with her two sons. 4They each married a Moabite woman, one named Orpah, the other named Ruth. They lived there about 10 years. 5Then both Mahlon and Chilion also died. So Naomi was left alone, without her two sons and without her husband. 6Then she and her daughters-in-law started on the way back from the country of Moab, because while still in Moab she heard the LORD had blessed His people and given them food. 7So she left the place where she had been, and her two daughters-in-law went with her. They were walking along the road back to the land of Judah 8when Naomi said to her two daughters-in-law, “Please go back, each of you to your mother’s home. 9The LORD be kind to you as you were kind to the dead and to me. The LORD help each of you find security in a home with a husband!” When she kissed them good-bye, they burst into loud weeping.

We probably need a little context to know what is going on. There was a famine in the land. Kiel and Dielitch believe it took place likely during the time of Judges chapter 6 which I give in part: Israel did what was evil before the LORD, and the LORD put them in the hands of Midian for seven years. 2Midian overpowered Israel; to protect itself against Midian, Israel found hiding places in the hills, caves, and mountain strongholds. 3Whenever Israel sowed the ground, Midian, Amalek, and the other people of the east would come; they would come up and attack them. 4They would camp against them and destroy the products of the land up to Gaza and leave nothing for Israel to live on, not a sheep, cow, or donkey,…

So we see Israel was back to their old stiff-necked ways of rebelling against the Lord and worshipping other gods, doing evil by not trusting him and obeying his commandments.  Because of this the Lord sent the Midianites (a distant cousin to the Israelites through Abraham’s second wife) to punish them. It would happen that whenever the Israelites would plant their crops the Midianites would come through the land, take the crops and livestock and likely destroy the upcoming crops and left nothing for the Israelites to live on. Such was the probable cause for the famine in the land that caused Elimelech to move to Moab. Now Moab was also a cousin to Israel. While they were there, Elimelech’s boys, Malchon (the weakly) and Chilion (pining) married Moabite women. It then happened that all the men died leaving Naomi (the gracious) and her daughters in law behind.

Well the Lord had delivered the Israelites who cried out to him,…again, by sending Gideon, another judge who defeated the  Midianites and things got better in Israel so Naomi decides to return home to her people since there was nothing left for he in Moab. She encourages her daughters in law to remain there since she would not have any boy children whom they could marry to carry on the family name. Now what we will see tomorrow is the Lord has used the unfaithfulness of the Israelites, including the family of Elimelech to fetch an ancestor of the promised Messiah who would not only deliver Israel from all their sins but the sins of the whole world even though Elimelech’s family would not from his seed but that of his relatives bear him.

So what do we do with this? God works all things out for good for those who love him who have been called according to his purpose. His plans will prevail despite our sins and unfaithfulness and we are to put our trust in him and his divine providence.

Heavenly Father, grant us faith to trust in your divine plans and not in our own for lives now and for the world to come. In Jesus’ name we pray. Amen.