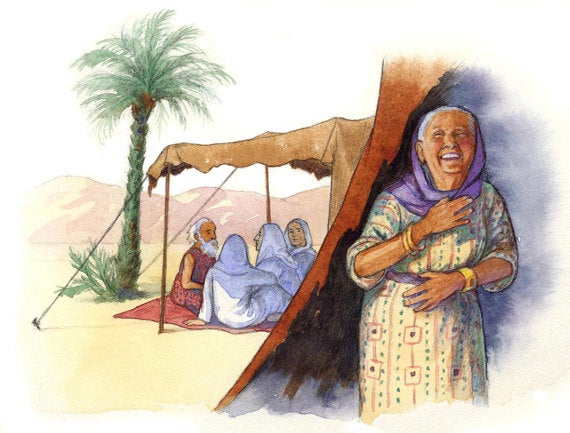 #DailyDevotion The LORD Jesus Gets The Last Laugh

The LORD has come to Abraham to reaffirm the covenant he had made with him. Abraham was to have many descendants. They were to inherit the land he was sojourning in.  But first Abraham would need a son. Now Abraham did have a son through Hagar but that was not the LORD’s planned son for Abraham. He was not the child of promise. The child of promise would come from both Abraham and Sarah.

Now Sarah was old. I mean real old. She was ninety years old when the LORD told Abraham, “next year I will return and Sarah will have a son.” Hearing this, Sarah laughs to herself saying, “After I am worn out, and my lord is old, shall I have pleasure?” Indeed Sarah like most women her age had reached menopause and indeed as far as childbearing goes was worn out. Perhaps the Lord miraculously preserved her ovaries. Perhaps he cause one egg to come forth into her womb to be fertilized by Abraham’s seed. We don’t know. Sarah was certainly surprised she was going to know pleasure from her husband Abraham.

The LORD asked Abraham, “Why did Sarah laugh?” Certainly the LORD understood why she laughed. It was a laugh of disbelief. Something to the effect of  “Yeah, right!” But the LORD wants her and Abraham to have faith and believe. He gives them a word, “Is anything too hard for the LORD?” Is anything to marvelous or difficult for the LORD to do? Well of course not. He is the LORD. Indeed, a year would go by and the LORD returned and Abraham would have a son and he was named Isaac—which means “He Laughs.” While Sarah laughed at the LORD’s announcement he gets the last laugh.

Now the same LORD who made this covenant with Abraham and talked with him that date and reiterated his promise to him is the same LORD who would one day be joined to Abraham’s flesh and become one of his descendants. The LORD had promised through one of Abraham’s seed all nations would be blessed. The LORD would send his angel to another unlikely mother, one of whom it would be equally impossible to have a child. That would be the Virgin Mary.

A virgin who has not known a man is just as infertile as an old woman. Ok, we can do some things scientifically today, but still, it’s still impossible without the help of a man. Someone still has to donate some dna for science to do the job. But there would be no man. As the LORD told Eve, “your seed will crush his [Satan] head.” The LORD would bypass the man and would cause himself to be joined with Mary’s seed and become the promised descendent. For as he asked Sarah, “Is anything too hard for the LORD?” He has his angel tell Mary, “For nothing is impossible with God.” Now the LORD made flesh also does another impossible thing. Jesus the LORD dies on the cross so man’s sin is atoned for and you and me can inherit eternal life.

Gracious God and Father, give us faith to believe the good news that we might not laugh in disbelief but wholehearted trust in your promise that through the death of your Son, our LORD Jesus Christ our sin is atoned for and the gift of eternal life is given us. In Jesus’ name we pray. Amen.

Just somedays these scriptures are hard for me to wrap my head around. Sometimes I wish I was more simple minded. To believe again like a child, innocently accepting.

Well I hope this devotion helped towards that some today. 🙂