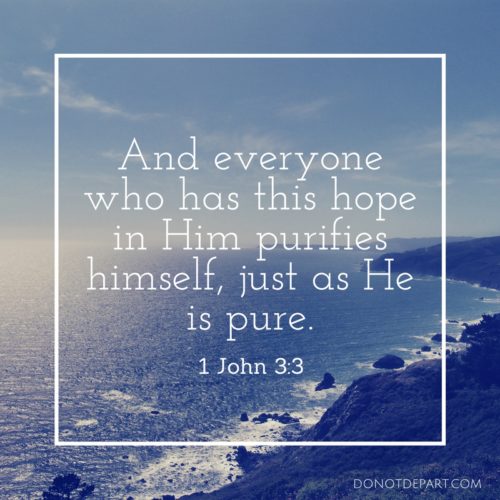 #DailyDevotion The Father Purifies Us Through The Promises

1 John 3:1–4 See how the Father has loved us — we are called God’s children, and that’s what we are. The world doesn’t know uş, because it didn’t know Him. 2Dear friends, we are now God’s children, but it hasn’t yet been shown what we’re going to be. We know that when it will be shown, we’ll be like Him because we’ll see Him. as He is. 3And everyone who trusts Him for this purifies himself as He is pure.

John’s epistle reminds us a lot of the things that are written in his Gospel. Here he speaks of the Father has loved us. This brings me to the 3rd chapter of John, 16 “God so loved the world that He gave His only-begotten Son so that whoever believes in Him would not perish but have everlasting life.” Yes, the Father does love us. He loves the world. He loves the whole world and everyone in it. That does not contradict that He hates sin and everyone who commits evil. Yet, it is not the Father’s desire to hate us. Hence He sends the Son into the world to die for our sins, propitiating his wrath and giving us the promise that everyone who looks to the Son, Jesus Christ, will have everlasting life.

John says the world doesn’t know us because it didn’t know him. Again in chapter one of his gospel John writes, 10”He was in the world, and He made the world, and the world didn’t know Him. 11He came to His own, and His own people didn’t welcome Him.” We should not be surprised how the people of the world react to us. Encountering us is like encountering an alien from another planet. We are very disconcerting to them when we live out our faith before them. You’ve seen movies and TV shows where people encounter the unknown. They act in fear. We make them afraid. We should not be afraid of them though. Our LORD Jesus Christ is with us.

John promises us we will be like Jesus when he appears, that is, we will see our participation in his divine nature: his righteousness, holiness, glory, etc. He tells us the thing that makes this so is his very promise, 3”And everyone who trusts Him for this purifies himself as He is pure.” Peter also writes in his second epistle chapter one, 4”Thus He has given us His precious and very great promises, so that after you have escaped the corruption that lust brought into the world, you might by these promises share in the divine nature.” The promises of God in Christ Jesus is what makes us participants and sharer’s in all that is Christ Jesus and makes us holy, righteous, and pure. You want more of this in your life, then remember his promises regularly.

Heavenly Father, you have called us to be your children through the promises of your Son Jesus Christ. Keep these forefront in our minds that we may reflect his divine nature in our lives. In Jesus’ name we pray. Amen.