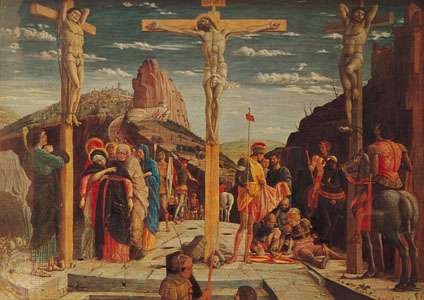 #DailyDevotion The Cross Of Jesus Is His Glorification

John 12:20–33 20Among those who came up to worship at the festival were some Greeks. 21They went to Philip (who was from Bethsada in Galilee) and told him, “Sir, we want to see Jesus. 22Philip went and told Andrew. Andrew and Philip went and told Jesus. 23Jesus answered them, “The time has come for the Son of Man to be glorified. 24Surely, I tell you, if a kernel of wheat doesn’t fall into the ground and die, it will be just one kernel. But if it dies, it produces much grain. 25Love your life and lose it, but hate your life in this world, and you will keep it for an everlasting life. 26If you serve Me, follow Me; and where I am, there My servant will be. If you serve Me, the Father will honor you. 27“I am deeply troubled now. But what should I say? Father, save Me from what is going to happen? No! I came to suffer this now. 28Father, glorify Your name.” Then a voice came from heaven: “I have glorified My name and will glorify it again.” 29The crowd, which stood there and heard it, said it had thundered. Others said, “An angel talked to Him.” 30Jesus explained: “That voice did not come for My benefit but for yours. 31“Now this world is being judged: now the ruler of this world will be thrown out. 32And once I have been lifted up from the earth, I will draw all people to Me.” 33He said this to indicate how He was going to die.

How quickly does the mood change here from the glorious entry into Jerusalem to Jesus speaking of his glorification. Here as when James and John sought to be with Christ in his glory, that glory isn’t sparkling lights and fanfare. Jesus defines his glorification he says, “Surely, I tell you, if a kernel of wheat doesn’t fall into the ground and die, it will be just one kernel. But if it dies, it produces much grain.” It is Jesus’ glory to die so that through his death we would become the much grain that is produced from it. Again it is strange to think of the Son of Man dying given his glorious appearance in Daniel chapter seven. Without the glory of the cross the glory of his coming with the angels would seem somewhat empty because we would not be with him glory. Yet with the glory of the cross, Jesus’ return as the Son of Man with all his angels is indeed glorious because he gives us his kingdom at that time.

Jesus then takes us into himself. He calls us to hate our lives and the world with all of its trappings. In doing so, for his name’s sake, we keep our lives for an everlasting life with him. Paul tells us in 2 Corinthians that we participate in the sufferings of Christ. We also will participate in his glory. What is said of the Son of Man in Daniel seven is also spoken of concerning his saints, 27“And the kingdom, along with the power and greatness of all the kingdoms under heaven will be given to the holy people of the Most High God. Their kingdom is everlasting, and all other authorities will serve and obey them.”

Jesus came to suffer and be glorified in that suffering. The Father is glorified in the suffering of his only begotten son for in his sacrifice the ruler of this world is dethroned. Satan is removed from heaven and can no longer accuse us any longer. He cannot stop the gospel from going forth and bringing people to Christ. Jesus’ being lifted up on the cross draws everything, even all creation and redeems it. Jesus came to suffer death, even death on a cross. It is his glory to save us and all creation. We can rejoice and be glad in it.

Heavenly Father, you glorified your name by sending Jesus to be crucified on our behalf so the sin of the world is forgiven. Grant us faith in Christ so we may follow him and be where he is unto life everlasting. In Jesus’ name we pray. Amen.