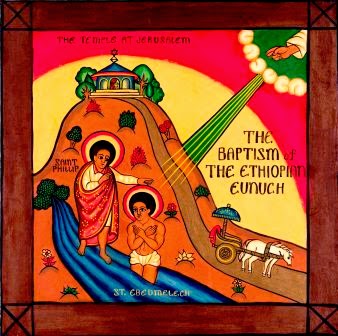 #DailyDevotion The Church Grows Through Sharing The Good News Of Jesus

Acts 8:36-40 36 As they were going along the road, they came to some water. “Here is water,” the eunuch said. “What keeps me from being baptized?” 38He ordered the chariot to stop, and both Philip and the eunuch stepped down into the water, and Philip baptized him. 39When they had stepped out of the water, the Lord’s Spirit suddenly took Philip away, and the eunuch, going happily on his way, didn’t see him again. 40But Philip found himself in Ashdod. He went through all the towns, bringing them the good news.

Philip starting with the passage from Isaiah taught the good news of Jesus Christ to the Ethiopian Eunuch. We’re not taught how long Philip taught him but I think we can assume it wasn’t past dark. The eunuch already knew the Jewish faith. He was a practitioner of it. It was why he was leaving Jerusalem back for Ethiopia. No doubt he had been taught much about the Messiah and was waiting for him to show up. Now Philip presents the Messiah to him starting with the Suffering Servant song from Isaiah 53. It would be great to know what else he taught the eunuch. One can imagine him quoting Genesis three or eighteen, Deuteronomy eighteen, the Lord’s promise to David and Solomon and not to mention all the places referenced to the Messiah in the Psalms.

Eventually in all this, referencing the life of Jesus, his ministry following John’s and the “Great Commission” from Matthew twenty-eight the eunuch says, “Here is water. “What keeps me from being baptized?” The message of Jesus Christ of Nazareth, his life and work, is used by the Holy Spirit to bring people to faith in Jesus. It did the eunuch. Having received faith in Jesus and the promise of baptism he wants to be baptized before going back to Ethiopia. When is he going to have another chance? Who knows when the Church will get down there so he may be baptized. No, the Holy Spirit knew what he was doing when he moved Philip to go to him. The Eunuch would bring the message of Jesus Christ to his people who were also awaiting the Messiah to come.

Some people think we should baptize quickly others only after prolonged instruction. In Acts we often see the people getting baptized somewhat quickly, yet most of them were Jews, Samaritans or God fearers. They knew the Scriptures and were awaiting the Messiah. He need only be witnessed by those who knew him. There is the Philippian jailer who was baptized as quickly as the rest. He was neither a Jew, Samaritan or God fearer as far as we know. We don’t know much about him or his religious background. He does ask Paul what he must do to be saved. After a quick quip about believing in Jesus Christ, Paul then spends a fair amount of time instructing him and his family about Jesus. Before the night is through, it appears the whole household is baptized. So should we baptize as soon as someone asks? Should we have a day long period of instruction? Should we have several years like the early Church? Taking examples from descriptive actions is not the same as prescribed actions. I believe the pastor should use his discretion and see what he thinks is best for the individual. We note, Philip is preaching after he is whisked away by the Spirit, another good reason to think the deacons were placed into the Office of the Ministry. May the Lord move us to pray for opportunities to share his good news and may that message be effective by the Spirit to move people who hear to believe in Jesus and be baptized.

Heavenly Father, provide us with opportunities to share the good news of Jesus with others so they too may believe and be baptized with us in Christ Jesus. In Jesus’ name we pray. Amen