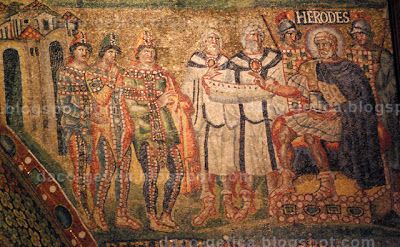 Mat 2:1-6  Now after Jesus was born in Bethlehem of Judea in the days of Herod the king, behold, wise men from the east came to Jerusalem,  (2)  saying, “Where is he who has been born king of the Jews? For we saw his star when it rose and have come to worship him.”  (3)  When Herod the king heard this, he was troubled, and all Jerusalem with him;  (4)  and assembling all the chief priests and scribes of the people, he inquired of them where the Christ was to be born.  (5)  They told him, “In Bethlehem of Judea, for so it is written by the prophet:  (6)  “‘And you, O Bethlehem, in the land of Judah, are by no means least among the rulers of Judah; for from you shall come a ruler who will shepherd my people Israel.’”

Now while we might want to focus on who are these guys who came to Jerusalem, whether they’re wise men, magi, kings, etc. what we need to focus on is why there are there. Yes, as moderns we may also want to trash the idea there were three just because there were three gifts. But again, is that is what is important here? No.

What is important? “Where is he who has been born king of the Jews? For we saw his star when it rose and have come to worship him.” This is what is important here. The Lord the Living God of Israel is fulfilling his promises. The Lord had promised David that one is seed who sit on his throne forever. Now that seed who is king of the Jews is born. Now at the time Herod was ruling over Judea (and he wasn’t a Jew but an Edomite). But the Lord God had remembered his promise and his mercy to Israel. A savior, the savior had been born and the Lord had given a sign to the nations they would recognize.

Now this child is not just a seed of David, he is someone the nations would come and worship. He is Christ, the Lord. Eve thought Cain was that promised seed when she said, “I have given birth to son, the Lord!” But she was wrong. The world indeed had been waiting for this promised seed, though like Eve, the message had gotten blurred over the ages. But now, the Living God, the Lord of Israel, the God of Abraham, Isaac and Jacob, had joined himself to David’s seed and become man. He has come to save not only Israel but the nations from their sin, from death, from the darkness that veils men’s hearts and bring his light into the world.

And as promised, as foretold, he was born in Bethlehem in Judea, David’s town. He would be the new David, the shoot of the stump of Jesse and Jesse’s root. The Branch of David as was foretold by the prophets.

If the Lord God has fulfilled these promises, then you can trust he can and will fulfill his promise to you. If you are repentant, are baptized into Christ and trust in Jesus you will be saved. You have passed from judgment to eternal life. Christ Jesus will raise you up on the Last Day give you the inheritance, the kingdom of God and eternal life with God. You will be transformed into the image of the Son, Jesus Christ and be holy, blameless, without defect, righteous and will bear his glory. Yes, these are the promises the Lord has made to you. You can be certain they will be fulfilled because he has fulfilled the promises he made in the past.

Heavenly Father, give us faith in the promises of Christ Jesus as we see your promises that have been fulfilled in Christ, that we may be comforted and come to worship him as our Lord, King and God and receive through him the gifts he won for us. In Jesus’ name we pray. Amen.