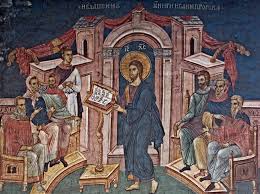 #DailyDevotion Rejoice In Jesus While You Still Can

Luk 4:22-31  And all spoke well of him and marveled at the gracious words that were coming from his mouth. And they said, “Is not this Joseph’s son?”  (23)  And he said to them, “Doubtless you will quote to me this proverb, ‘“Physician, heal yourself.” What we have heard you did at Capernaum, do here in your hometown as well.’”  (24)  And he said, “Truly, I say to you, no prophet is acceptable in his hometown.  (25)  But in truth, I tell you, there were many widows in Israel in the days of Elijah, when the heavens were shut up three years and six months, and a great famine came over all the land,  (26)  and Elijah was sent to none of them but only to Zarephath, in the land of Sidon, to a woman who was a widow.  (27)  And there were many lepers in Israel in the time of the prophet Elisha, and none of them was cleansed, but only Naaman the Syrian.”  (28)  When they heard these things, all in the synagogue were filled with wrath.  (29)  And they rose up and drove him out of the town and brought him to the brow of the hill on which their town was built, so that they could throw him down the cliff.  (30)  But passing through their midst, he went away.  (31)  And he went down to Capernaum, a city of Galilee.

Verse 22 is kind of strange here. On the surface it looks like they are happy to hear what Jesus has been preaching. They are marveling at his gracious words. And then this happens, “Is not this Joseph’s son?” Their familiarity with Jesus causes them to reject him and his message. Instead of rejoicing that one of their own, from their hometown was the Messiah and the Lord had sent him to them, their eyes and ears become closed to him.

Jesus sees this and lets them know that he understands their rejection. A prophet  is not accepted in his hometown. Now the next few verses are important because we are in Epiphany season. Epiphany starts off with Jesus being revealed to the gentiles. Jesus begins listing off all of the places and times different prophets had ministered to gentiles and not to Israel (and Israel at that time had fallen away in faith). The gentiles received the prophets and their words while Israel did not.

What is Jesus getting at? He is in effect letting the Jews there at Nazareth they are no better than their ancestors who rejected him in ancient Israel as they are now rejecting him in the flesh. Indeed not only Nazareth but the Jews in Jerusalem would end up following the path of their fathers in rejecting Jesus, the Lord, as their king and would crucify him. The Nazareens became outraged and intended to throw Jesus off the cliff. It wasn’t Jesus’ time. They would get their chance to kill him with the Jew in Judea at the appropriate time.

We should remember that majority of the early Church was Jewish. Even many of the priests who had rejected Jesus before the crucifixion become believers after the resurrection. But as Paul tells us in Romans, a hardening has come upon the Jews so God may have mercy on you. Branches have been cut off to make room for you wild olive branches in the olive tree of Israel. The Lord Jesus has sent out his people to the gentiles (non-Jews) to let them know salvation, eternal life, the forgiveness of sins, the resurrection from the dead in Jesus’ name, freedom from our guilt and shame is ours to be had through the free gift of Jesus Christ. Rejoice in the good news and be glad in it. Do not be like the unbelieving Jews who marveled at Jesus’ gracious words and then rejected him. Marvel, rejoice and give thanks for them lest Jesus pass on his way and goes somewhere else bringing his word with him.

Heavenly Father, grant us your grace that we not only marvel at the gracious words of Jesus but also trust and believe them so we too may receive and enter into the year of the Lord’s favor. In Jesus’ name we pray. Amen.