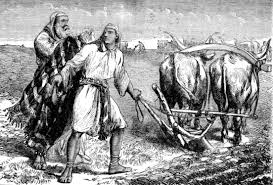 #DailyDevotion Ready To Burn Some Bridges?

1Ki 19:15-21  And the LORD said to him, “Go, return on your way to the wilderness of Damascus. And when you arrive, you shall anoint Hazael to be king over Syria.  (16)  And Jehu the son of Nimshi you shall anoint to be king over Israel, and Elisha the son of Shaphat of Abel-meholah you shall anoint to be prophet in your place.  (17)  And the one who escapes from the sword of Hazael shall Jehu put to death, and the one who escapes from the sword of Jehu shall Elisha put to death.  (18)  Yet I will leave seven thousand in Israel, all the knees that have not bowed to Baal, and every mouth that has not kissed him.”  (19)  So he departed from there and found Elisha the son of Shaphat, who was plowing with twelve yoke of oxen in front of him, and he was with the twelfth. Elijah passed by him and cast his cloak upon him.  (20)  And he left the oxen and ran after Elijah and said, “Let me kiss my father and my mother, and then I will follow you.” And he said to him, “Go back again, for what have I done to you?”  (21)  And he returned from following him and took the yoke of oxen and sacrificed them and boiled their flesh with the yokes of the oxen and gave it to the people, and they ate. Then he arose and went after Elijah and assisted him.

Elijah thought he was all alone. We can feel like that even when it was demonstrated not that long ago that we weren’t. Didn’t the people obey Elijah when he showed who the real God is? Yet at the word of queen he buckled. God confirmed to Elijah he was not alone. The Lord had preserved seven thousand in Israel who hadn’t bowed to Baal, the false god.

The Lord still has work to do. Elijah may have thought that he had enough but he was going to use him to institute new leaders and a new prophet to replace himself and the leaders that were in power who did not listen to the voice of the Lord.  The Lord commands Elijah to anoint Hazael to be king over Syria, Nimshi king of Israel and Elisha to be the prophet in Elijah’s place. These three would put to death those who threatened Elijah, the Lord’s prophet. So with the Lord’s promise and command he sets off to do what he was appointed to do.

Elijah would encounter Elisha along the way. He throws his cloak over Elisha while he was plowing the fields. I guess it must have been a custom that was recognized at the time for Elisha knew what Elisha had done to him for he runs after Elisha and begs that he is able to tell his parents goodbye.  Having done that, Elisha takes the yokes of the oxen, burns them and sacrifices his oxen as sacrifice to the Lord, feeding the people there.

Now this is important, for Jesus said, Luk 14:26-28 “If anyone comes to me and does not hate his own father and mother and wife and children and brothers and sisters, yes, and even his own life, he cannot be my disciple.  (27)  Whoever does not bear his own cross and come after me cannot be my disciple.  (28)  For which of you, desiring to build a tower, does not first sit down and count the cost, whether he has enough to complete it?” To follow Elijah, Elisha had to burn down the bridges to his past. He has a new life with the prophet Elijah; though in this case it was yokes and oxen. When Jesus calls us to follow him there can be nothing more important than him. Are we willing to burn to bridges to our past, cut of past relationships which may get in the way of following the Lord and not look back to our former way of life? Jesus is the Lord and the Lord is a jealous God. While you may continue with parents, spouse, children, friends and the like are you willing to let it all go in order to follow Jesus? Jesus gave us his all on the cross. He promises he will never leave us or forsake us. Jesus wants the same from us. Let us not look back like Lot’s wife at our past life but let us look up and see what Jesus has prepared for us in the heavenly places.

Heavenly Father, grant us your grace to remember Jesus’ promise of continued presence with us and let us put aside all things in our lives that we would replace with you so we may ever be faithful to Christ Jesus our Lord. In Jesus’ name we pray. Amen.