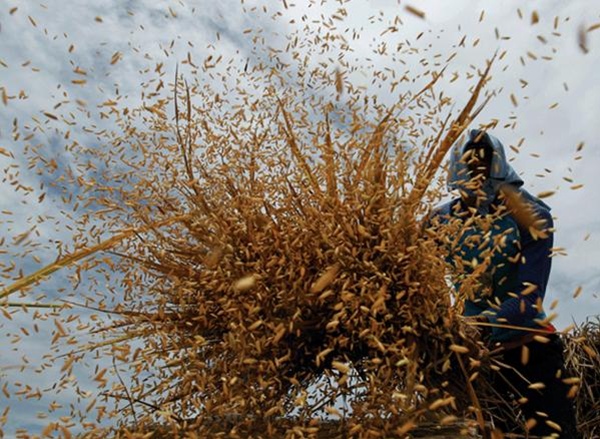 #DailyDevotion Prepare To Be Shaken

Hebrews 12: 25See that you don’t refuse to listen to Him Who is speaking. If the others didn’t escape when they refused to listen to Him warning them on earth, much less will we if we turn away from Him Who warns us from heaven. 26Then His voice shook the earth. But now He has promised: “Once more I will shake not only the earth but also heaven.” 27The words “once more” show clearly He will take away what is shaken, seeing He made it, leaving what isn’t shaken as permanent. 28Since we have received a kingdom that can’t be shaken, let us thank God and so worship in a way that pleases Him, with fear and awe, 29because our God is a consuming fire.

Now it is not exactly clear here who is speaking from earth and who is speaking from heaven, but I would say that it is mostly likely Moses who speaks from earth and our Lord Jesus Christ is the one speaking from heaven. It is written, Joh 3:13 “No one has ascended into heaven except he who descended from heaven, the Son of Man.” And again, Joh 1:17 “For the law was given through Moses; grace and truth came through Jesus Christ.” Now those who disobeyed Moses in the wilderness had to wander the wilderness for forty years until they died off. Some who disobeyed were swallowed up by the earth, while others were consumed by fire. Now we have the Lord Jesus Christ in the flesh who was from heaven, descended to earth to become one of us and as ascended to the right hand of the Father. He has called us to his grace and truth. What will happen to us if we turn away from him? Well he tells us; we will be cast into the lake of fire which is the second death.

As the voice of the Lord shook the earth on behalf of his servant Moses, so now the Lord Jesus Christ will not only shake the earth but the heavens and the earth will be shaken. This is nothing less than the judgment of God. That which isn’t shaken is that which remains. Paul writes, 1Co 3:11-16 “For no one can lay a foundation other than that which is laid, which is Jesus Christ.  (12)  Now if anyone builds on the foundation with gold, silver, precious stones, wood, hay, straw—  (13)  each one’s work will become manifest, for the Day will disclose it, because it will be revealed by fire, and the fire will test what sort of work each one has done.  (14)  If the work that anyone has built on the foundation survives, he will receive a reward.  (15)  If anyone’s work is burned up, he will suffer loss, though he himself will be saved, but only as through fire.  (16)  Do you not know that you are God’s temple and that God’s Spirit dwells in you?” Peter refers to it, 1Pe 1:4 “to an inheritance that is imperishable, undefiled, and unfading, kept in heaven for you,…” Jesus also said, Luk 18:22 “When Jesus heard this, he said to him, “One thing you still lack. Sell all that you have and distribute to the poor, and you will have treasure in heaven; and come, follow me.”

We have been given a kingdom that cannot be shaken. Since this is so, we should live such live that gives thanks to God and worships in a way that pleases him. As we have seen earlier in Hebrews, what pleases God is to have faith in Jesus and his promises. God does not want us to worship him just going through the motions. He wants our hearts to truly trust him and give thanks to him. Jesus says, those who worship the Father must worship him in spirit and in truth. That is to worship him trusting in his promises. We also come to him with fear and awe. Fear, hating evil (Prov. 8:13) and awe, showing proper respect as one who is greater than our earthly fathers is how we come to him, for he has created us and all things. We come to him this way because our God is a consuming fire. That is to say, as we see in the Corinthian passage above, God will purge from us anything from us that doesn’t proceed from faith in Christ Jesus. Such things that will last are works of kindness, mercy, forgiveness and love to those whom Christ has redeemed.

Gracious and merciful Father, you are a consuming fire who will purge from all that cannot enter your holy kingdom. So give us your Holy Spirit and faith that everything we do proceeds from faith and ends in love so we will not waste our lives but store us treasure in heaven which we will receive when you and your son Jesus Christ to shake the earth and establish your kingdom. In Jesus’ name we pray. Amen.