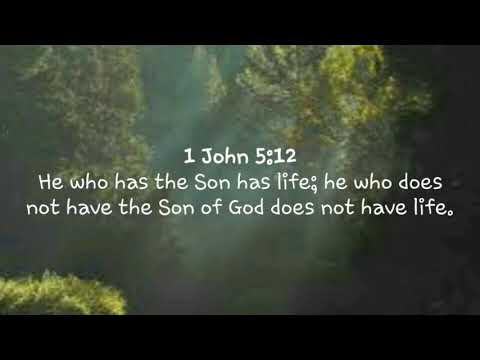 #DailyDevotion Not Everybody Has Life In Them

1 John 5:9–13 9If we accept the testimony of men, God’s testimony is greater because God’s testimony is the truth He told about His Son. 10If you believe in God’s Son, you have in you the testimony of the truth. Anyone who will not believe God has made Him a liar because he hasn’t believed the truth God told about His Son. 11He told us this truth that God has given us everlasting life and this life is in His Son. 12If you have the Son, you have life. If you don’t have God’s Son, you don’t have life. 13I’m writing you this so that you who believe in the name of God’s Son will know you have everlasting life.

We accept what two or three witnesses say in a court of law. God’s testimony is greater than that because his witnesses are the Spirit, the water and the blood. These testify that Jesus is God’s Son who became flesh, died to atone for our sins and justified us by his resurrection from the dead.

If we believe God’s testimony, you have in you the testimony of the truth. The truth is the Spirit and Jesus in you. We cannot say Jesus is LORD (meaning YHWH the God of the Old Testament) except by the Holy Spirit. With our hearts we believe and with our tongues we confess our faith in Jesus Christ. We just don’t witness to this faith willy nilly. Now some may confess Jesus is Lord (meaning ruler) and they do not have the truth in them. They do not have the truth in them because they will not confess Jesus is the Word, one in essence and being with the Father. Only those who have God’s testimony in them will confess Jesus is light of light, God of God, one in being and essence with the Father. We confess that this Jesus died for our sins and his blood cleanses us from all our sins. We confess he rose from the dead on the third day and sits at the right hand of God the Father. We confess he is coming again to judge the living and the dead.

If this is not the confession of a person’s heart and lips then that person has made God a liar because they don’t believe the truth God told about his Son. We often want to pussyfoot around concerning people and their spirituality. We don’t want to tell people they are wrong. We don’t want to judge people’s faith. We don’t want to do that so people won’t think ill of us or reject us. But we must test the spirits. We should correct people’s faith. If they belong to God they will accept the correction. If they reject the God of the Scriptures, they will reject your correction. They don’t belong to God.

This testimony concerning the truth of God’s Son Jesus Christ gives us life, everlasting life. If you have this confession about Jesus you have everlasting life. Eternal life dwells in you and you cannot die. Your body may die but your soul is alive. Your body and soul will be reunited at the resurrection. Unbelievers do not have life in them. Their bodies died and at the resurrection their dead souls are reunited with their bodies. The reward for their unbelief is everlasting death, not annihilation but they don’t have the life of God in them. They will exist without God  and not know his love.

Believe this testimony and you have eternal life.

Heavenly Father, always give us your Holy Spirit that we may believe in your Son Jesus Christ and have his life in us unto life everlasting. In Jesus’ name we pray. Amen.