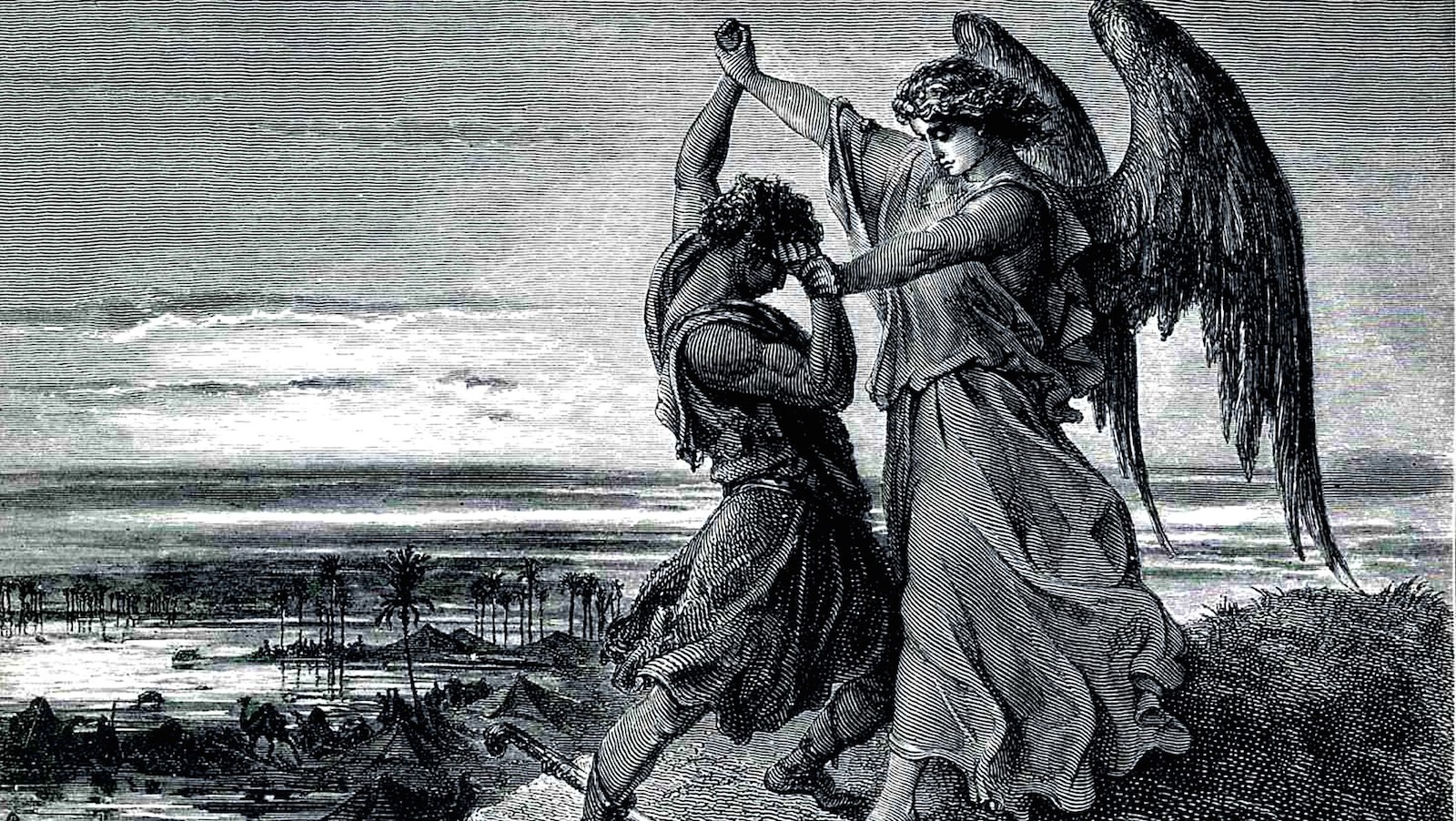 Genesis 3222That night he got up, and taking his two wives, his two maids and his 11 sons, he sent them across the ford of the Jabbok. 23He took them and sent them and all he had across the stream.24When Jacob was left behind alone, Someone wrestled with him till the dawn came; 25and when He saw He wasn’t winning against Jacob, He struck the joint of Jacob’s hip, so that it was dislocated as He wrestled with him. 26“Let Me go,” He said; “the dawn has come.” “I will not let you go,” Jacob answered, “unless You bless me.” 27“What is your name?” He asked him. He answered, “Jacob.” 28“Your name will no longer be Jacob but Israel,” He said, “because you have struggled with God and with men and have won.” 29“Please tell me Your name,” Jacob said. “Why do you ask for My name?” He asked. And He blessed Jacob there. 30Jacob called the place Peniel [Face of God],” saying, “I have seen God face to face, yet my life was saved.”

Jacob was returning home with his wives, children, servants and flocks from his uncle Laban’s household. He had pretty much burned out his welcome there like he had done in with his brother Esau from whom he had stolen the birthright and the blessing from Isaac. He is about to face that very same brother who is coming out to him with 400 men. He only expects the worst. His brother wanted to kill him the last time they were together. His father-in-law, uncle, was upset that he left without warning. Those two were like two peas in a pod, but the Lord was with Jacob and blessed him, even in the midst of his struggling with men, always trying to get a better deal no matter what. The Lord however is gracious and had a plan for Jacob despite himself and now he is coming out to meet with Jacob.

In the wilderness that night, the Lord, i.e. the Angel of the Lord, the pre-incarnate Jesus Christ, wrestles with Jacob. At first it doesn’t seem Jacob knows who he is wrestling with. Jacob is prevailing against the Lord and the Lord touches his hip socket and in doing so dislocates it. As I have often reminded my kids, there are no rules in fighting. The Lord wants Jacob to let him go as the day dawns. He does not want Jacob to see his face. Jacob would not let go. Jacob somewhere in the wrestling, perhaps when the man, with just a touch dislocates his hip, realizes he is wrestling with God himself in the form of a man, and will not let go unless he gives Jacob a blessing.

Hosea in chapter 12 comments, 3“In the womb he took his brother by the heel, and when he was a strong man he fought with God. 4When he fought with the Angel, he won, weeping and pleading with Him.” The blessing the Lord left him with was a new name. He used to be called Jacob, Usurper. Now, he will be called Israel, Prevailed with God. Jacob receiving the blessing wants to know the name of his adversary but he will not give it. The name reveals the character but is also thought to give control over the person. The Lord God, while conquered by Jacob, now Israel, will not be controlled.

It is a blessing from the Lord to receive a new name. Simon becomes Peter. James and John are called the sons of thunder. Saul becomes Paul. It used to be a custom in the early church to receive a new name when you were baptized. It was your Christian name. That is now our middle names. In baptism we become new creations in Christ. It is fitting we get a new name as we are born again, born of God. Jacob was born of God that morning. He saw the face of God and lived. He had experienced the mercy and grace of God. Israel never fulfilled God’s purpose for him. So the Lord God took on Israel’s flesh through Mary and fulfilled all that Jacob/Israel, his family was to do. As Jacob wrestled with God in the wilderness, Jesus wrestled with God in the garden. God answer to Jesus was he is to be the seed of blessing to the world. Jesus would overcome humanity’s enemies, sin, death and the devil by losing on the cross. Yet, by losing he wins. He wins the victory for us. In Christ we are blessed with new names.

Lord Jesus Christ, you blessed Jacob with a new name when he prevailed and promise in Revelation a new name to those who endure faithful to you until the end. Grant us the strength to prevail the struggles with the world and the devil so we may receive that new name at your return. Amen.