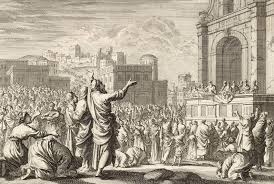 #DailyDevotion Let Us Bless The Lord And Hear His Word

Neh 8:1-3  And all the people gathered as one man into the square before the Water Gate. And they told Ezra the scribe to bring the Book of the Law of Moses that the LORD had commanded Israel.  (2)  So Ezra the priest brought the Law before the assembly, both men and women and all who could understand what they heard, on the first day of the seventh month.  (3)  And he read from it facing the square before the Water Gate from early morning until midday, in the presence of the men and the women and those who could understand. And the ears of all the people were attentive to the Book of the Law.

Neh 8:5-7  And Ezra opened the book in the sight of all the people, for he was above all the people, and as he opened it all the people stood.  (6)  And Ezra blessed the LORD, the great God, and all the people answered, “Amen, Amen,” lifting up their hands. And they bowed their heads and worshiped the LORD with their faces to the ground.  (7)  Also Jeshua, Bani, Sherebiah, Jamin, Akkub, Shabbethai, Hodiah, Maaseiah, Kelita, Azariah, Jozabad, Hanan, Pelaiah, the Levites, helped the people to understand the Law, while the people remained in their places.

So Judah had just spent seventy years in Babylon. While some of the exiles gathered regularly to hear God’s Word especially the Torah (the first five books) many apparently did not. Having returned to Jerusalem the people were gathered and they wanted to hear the Book of the Law of Moses. Having done so, he brought it before the people and read it to them. It took at least 4 to 6 hours to read. Unlike some people today they were able to pay attention past ten to twenty minutes most people are able to pay attention (without all sorts of fanfare and the like). They were all very attentive.

We see the people stood when the book or rather scroll was opened. We do the same thing when the Gospel is read in our churches. After blessing the Lord the people bowed to the ground and worshipped the Lord with their faces (literally nostrils) to the ground. Now it is unfortunate today that many kneelers have been taken out of the Churches. I cannot tell you why. I know I have unfortunately heard a few voices over the years proudly say they will not bow. They are children of God and shouldn’t have to bow. Apparently the worship scenes in the book of Revelation have escaped them. Even our Lord Jesus Christ, who is God of God and Light of Light bowed down in prayer. They even lifted up their hands in prayer. Well I have to admit we don’t do a whole lot of that either. Maybe we should.

And so today, the Lord our God, Jesus Christ has given us Eph 4:11 “the apostles, the prophets, the evangelists, the shepherds and teachers,…” Our Lord Jesus Christ has given them to read to us the Holy Scriptures. He has given them to explain to us what those scriptures mean. Like the Israelites we should fix our attention on them that we may know what the Lord’s will is toward us and what he wants to believe and to do. Such reading and explanations (sermons) should bring us to at the very least kneel before the Lord in our hearts and raise our hearts with repentance, thanksgiving and praise for all he has done for us.

Heavenly Father, never let your word depart from us and give us ears that hear and hearts that believe all that you would tell us and give us your Spirit that we may live our lives according to your word. In Jesus’ name we pray. Amen.