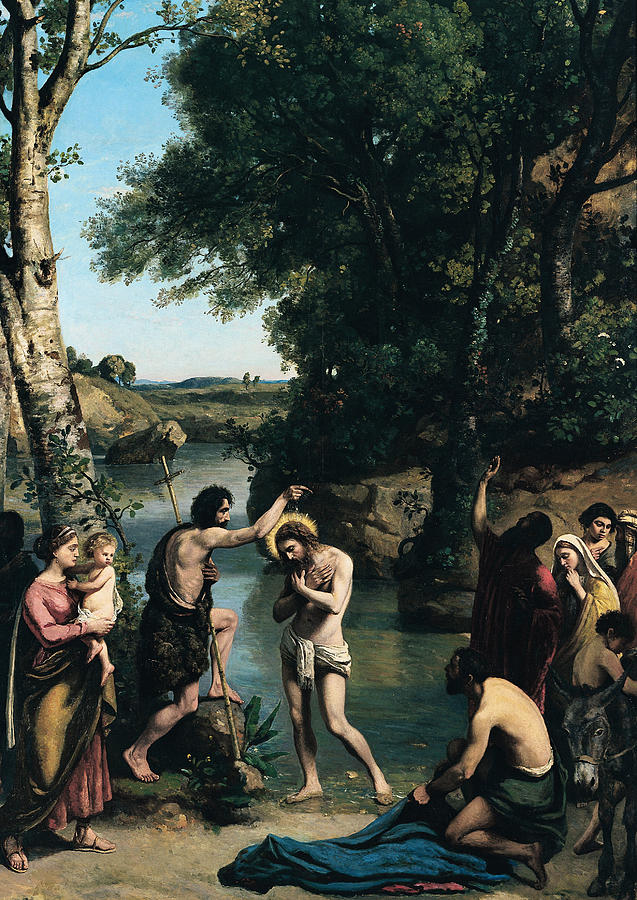 #DailyDevotion Jesus Repents For Us In His Baptism

Mark 14So John the Baptizer came into the wilderness, preaching that people repent and be baptized for the forgiveness of sins. 5All Judea and all the people of Jerusalem were coming out to him. As they confessed their sins, he baptized them in the Jordan River. John was dressed in camel’s hair with a leather belt around his waist. And he lived on grasshoppers and wild honey. 7He preached: “The One Who is mightier than I is coming after me. I’m not good enough to bend down and untie His shoe straps. 8I have baptized you with water. He will baptize you with the Holy Spirit.” 9It was in those days that Jesus came from Nazareth in Galilee and was baptized by John in the Jordan. 10Just as He stepped out of the water, He saw heaven torn open and the Spirit coming down as a dove on Him. 11And a voice from heaven said, “You are My Son, Whom I love. I am delighted with You.

In the Greek it says, “preaching a baptism of repentance for the forgiveness of sins.” Indeed that is what John’s baptism is and for the most part what Jesus’ baptism is as well. Jesus’ though includes a whole lot more. But we shouldn’t overlook John’s baptism for it is the baptism into which Jesus himself was baptized.  When you are baptized you are baptized into him and receive what is his. So too, our baptism also is a baptism of repentance unto the forgiveness of sins. So what does that mean? It means baptism is a beginning of turning away from our sin and turning to God. It means having a contrite heart and a broken spirit and a trusting God. In this baptism, the forgiveness of sins is given. The people who were baptized into John’s baptism had their sins forgiven. When you are baptized, your sins are forgiven. Then we noticed people were confessing their sins when they came to John. As people who live in baptism we too should confess our sins to one another and to our pastor. Thankfully none of us have to be baptized in the Jordon River.

Yet we shouldn’t overlook the Jordan River. It has significance when John was baptizing. John was the one to bring Israel back to God. He was beginning to restore Israel. So John calls Israel back to where they were before they went into the Promised Land. As Israel had to cross through the Red Sea and as they had to cross through the Jordan, so too, John was baptizing in the Jordan to have Israel repent and pass through it again. While many of the Jews were going out to John to be baptized by them, they were not the real target.

The real target for John’s ministry is Jesus. John reveals this to us in the Apostle John’s Gospel when he says, “Even I didn’t know Who He was, but I came and baptized with water to show Him to Israel.”(John 1:31) Jesus baptism reveals him to Israel to be Israel reduced to one. Jesus comes to do as Israel what Israel failed to do. Jesus then, in his baptism, becomes Israel and is baptized for Israel, repents for Israel and lives his life for Israel. But not only for Israel, He does it for the world and for you. So when you are baptized into Jesus you are baptized into what he has done. As the Father proclaims Jesus His Son, He proclaims you His Son. Jesus becomes repentant for us. He is tempted in the wilderness and overcomes temptation for us. He obeys the Father and keeps the covenant for us. He enters the Promised Land for us. He dies and rises again for us. All that which Jesus did is ours as we are baptized into him.

Heavenly Father, as you have called Jesus to be and do for us what we cannot do for ourselves, grant us faith to believe the gift you have given us in our baptism that what is his is now ours. In Jesus’ name we pray. Amen.