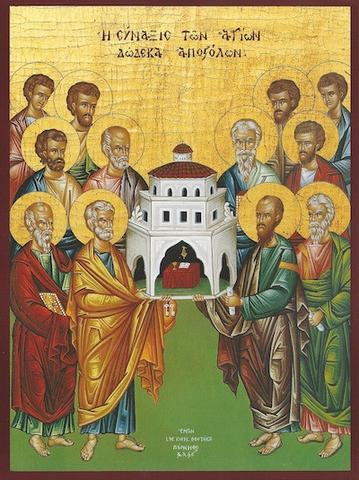 #DailyDevotion Jesus Lifts Us Into The Life Of God

Matt. 2816 The eleven disciples went to the mountain in Galilee where Jesus had told them to go. 17When they saw Him, they worshipped Him, but some doubted. 18And coming nearer, Jesus spoke to them, saying: “To Me has been given all authority in heaven and earth. 19 Therefore, wherever you go, disciple all nations, baptizing them in the name of the Father, and the Son, and of the Holy Spirit, 20teaching them to observe everything as I have commanded you; and remember, I am with you always until the end of the age.”

Really? Some of them still doubted at this point? Well, I don’t think they actually still doubting by the time they went to the mountain with Jesus here. I think Matthew is just pulling in here the several accounts not included in his Gospel what the other Gospel writers had in theirs, namely the apostles and Thomas early on during the forty day period before Jesus was taken up.

Now Jesus had often referred to himself as the Son of Man in the Gospels. The Son of Man is talked about here in Daniel 713“In the visions during the night I saw One coming with the clouds of the heavens like the Son of Man, and He came to the Ancient of Days and was presented before Him. 14And He was given glory, power to rule, and a kingdom, so that all peoples, nations, and those of every language should serve Him. His authority is everlasting and will not pass away, and His kingdom is one that will not be destroyed.” It’s no wonder the people were confused by Jesus calling himself this up to his resurrection. He wasn’t, in his ministry, kicking put and setting up rule as they expected him to do (other than demon, disease and death). But now he is going to be seated at the right hand of God begin to exercise his power and authority which is the same authority and power of the Father.

That ‘all’ Jesus refers to equates Jesus with God the Father. Jesus had put aside is power, dominion and authority when he took on human flesh. Now he has taken it back in his resurrection in his flesh and thereby glorified his flesh and gives us a clue as to our destiny as well when we are raised to eternal life. If Jesus has been given all authority in heaven and in earth, Jesus is God. Only God can have such authority and power. Jesus and the Father are one. They have always been one but now their oneness is made manifest to us.

Because all authority in heaven and on earth has been given to Jesus and he departs from us Jesus charges his apostles and by extension the church to make disciples as they go along. The command is to make disciples. ‘Go’ is a passive verb probably implying they will be going somewhere. Particularly the apostles were to go, as they are sent (Greek word for apostle means sent), into the world to proclaim Jesus as the world’s savior. And just how were they and by extension the church to make disciples? By baptizing into the name of God and teaching them everything Jesus had taught them. We should take note the name is singular signifying the unity and oneness of the Father, Son and Holy Spirit. Each one is LORD, Almighty, Holy, and God yet they are one LORD, one Almighty, one Holy and one God. We are to be baptized into that one name. We are made the dwelling place of God and God becomes where we live, move and have our being. We are brought into his life and being in the Son, Jesus Christ. Having been brought into the life of God we are to be taught what that life is, as Jesus taught his disciples and we are to keep, treasure, observe and do all the apostles have handed down to us in the sacred scriptures, everything Jesus had handed to them.

Heavenly Father, you have called us into your life, through faith in your Son Jesus Christ and by pouring into our hearts the Holy Spirit in baptism. Grant that by your grace and by the power of the Holy Spirit we are able to keep all that Jesus had taught the apostles and we may realize fully at Jesus’ revelation our life in you. In Jesus’ name we pray. Amen.