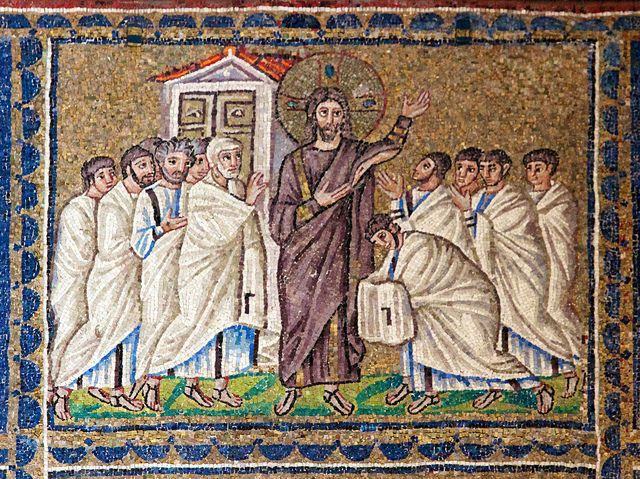 #DailyDevotion Jesus Leaves Us With The Power Of Attorney

Joh 20:19-23  On the evening of that day, the first day of the week, the doors being locked where the disciples were for fear of the Jews, Jesus came and stood among them and said to them, “Peace be with you.”  (20)  When he had said this, he showed them his hands and his side. Then the disciples were glad when they saw the Lord.  (21)  Jesus said to them again, “Peace be with you. As the Father has sent me, even so I am sending you.”  (22)  And when he had said this, he breathed on them and said to them, “Receive the Holy Spirit.  (23)  If you forgive the sins of any, they are forgiven them; if you withhold forgiveness from any, it is withheld.”

Peace be with you! Shalom! Those are Jesus’ words to his disciples as he appeared before them behind locked doors. They had been in fear since his arrest. Were they next? What is going to happen to them. Was it all a dream or the beginning of a nightmare? Shalom! Peace! All good things, all things necessary, even an over abundance of stuff, live long and prosper is the word Jesus speaks to them. Such is the peace the Lord gives. It is not as the world gives, conditionally, but according to the greatness and steadfastness of his love shown for them on the cross.

Jesus has to identify himself to them. His glorified body perhaps isn’t quite the same as the mortal one he bore since his birth. But the glory of God is in the stripes of Jesus, the sign of his crucifixion. So Jesus shows his disciples his glory in the nail prints in his hands and his feet. He shows them his side which was pierced through. These things Jesus kept that we may always recognize him. Recognizing this was Jesus and not just some ghost or apparition the disciples were glad.

Shalom! Again! A double blessing of peace! Jesus speaks Php 4:7 “ the peace of God, which surpasses all understanding, will guard your hearts and your minds in Christ Jesus.” They are going to need it. Jesus is sending them out into the world to continue the mission he has started. As the Father sent Jesus, Jesus sends his apostles. They will face the same sort of opposition Jesus faced. They too will have to bear their crosses and participate in his suffering. This peace Jesus also shares with you. He may not send you anyplace, but the peace, the shalom, he speaks to you gives you the strength to bear your cross and participate in his sufferings also.

This is what Jesus sends the apostles, and then the church through those whom he calls to enter into the office of his holy ministry, to forgive and to retain sins. Some people think only the apostles were given this gift. If that were so, where would the forgiveness of sins be? It is the main mission of the Church, the Bride of Christ, to distribute that which Christ won for the world on the cross. The authority of Christ is given to his Bride. Through his Bride, Jesus calls mean to speak the word of peace, i.e. the forgiveness of sins. He breaths on them the Holy Spirit, his life. He breathes this breath of life into us when his representatives speak the words of Christ’ forgiveness. Of course the Church and her pastors can also withhold the forgiveness Christ won on the cross of those who continue unrepentant of their sins, and even that is to the service to make them contrite and desiring this peace of Christ.

Jesus would not have us without the assurance and confidence of the forgiveness of our sins. To that end, he places his words of forgiveness, gives his representatives authority (like power of attorney) to forgive and retain sins. Whenever your soul is troubled, when your conscience is burdened by you sins, you can go to the one whom Jesus has given authority to forgive those sins and speak his shalom, his peace into your hearts.

O merciful and loving God, you sent your son into the world to win forgiveness of sins upon the cross and Jesus sends those he has chosen with the authority to give this forgiveness won for the world upon the cross to troubled consciences. Always provide for us such men that when we are troubled we may hear your word of peace and reconciliation. In Jesus’ name we pray. Amen.