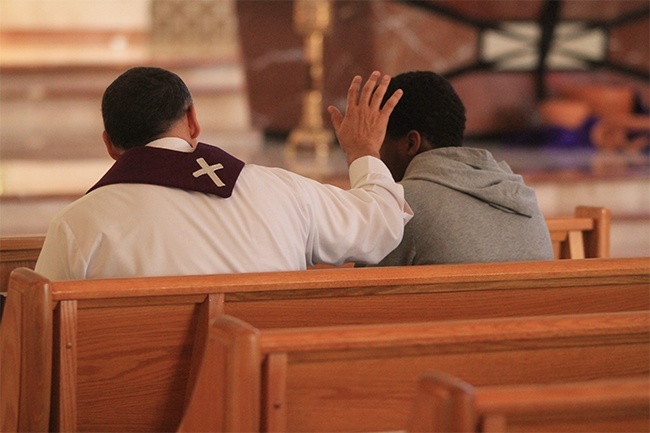 #DailyDevotion Jesus Leaves Us His Peace Through His Pastors

John 20:19–23 19That Sunday evening the doors were locked where the disciples were, because they were afraid of the Jews. Then Jesus came and stood among them and said to them, “Peace to you!” 20When He said this, He showed them His hands and His side. Then the disciples were delighted to see the Lord. 21“Peace to you!” Jesus said to them again. “As the Father sent Me, so I send you.” 22When He had said this, He breathed on them and said, “Receive the Holy Spirit. 23Whenever you forgive people’s sins, they are forgiven; whenever you do not forgive them, they are not forgiven.”

The disciples had only received the women’s report, but no one believed women in those days, that Jesus was alive. But they knew he was dead. John himself was at the cross. The women had seen where they had placed Jesus. Peter and John both knew Jesus was no longer in the tomb because they had been there but as far as they knew, someone had taken the body. So they were still very much afraid of the Jews, that is the Jewish leadership, because they thought they would come after them next.

Enter stage left into the locked home Jesus. He speaks to them the typical Jewish greeting, “Shalom! Peace to you.” He showed them it was really them by showing his hands and his side. They were delighted to see Jesus risen from the dead, just as the women had told them. “Shalom. Peace to you,” Jesus tells them again. The king of peace speaks the word of peace and brings into being among them.

But there is something left to do. Jesus had won peace, reconciliation with the Father between men and the Father but this peace needs to be proclaimed and distributed. This same peace is to made between men and men. So Jesus sends his apostles into the world. They in turn would empower men with the same mission, to proclaim the peace of God to the world through faith in Jesus Christ.

Now this passage probably sounds strange but it isn’t really. John says Jesus breathed on them  and said, “Receive the Holy Spirit. 23Whenever you forgive people’s sins, they are forgiven; whenever you do not forgive them, they are not forgiven.” It’s not all that strange because when you speak, you are breathing. So it is in the act of speaking that Jesus is giving them the Holy Spirit and empowering them, giving them authority to forgive sins and to retain sins. The Apostles of course handed this down to those they commissioned to carry on their work, those called by and through the Church, Christ’s Bride, to proclaim the peace of Christ Jesus to the world.

In Mark 2, Jesus said, 10“I want you to know the Son of Man has power on earth to forgive sins.” In Matthew 16 Jesus gave this authority to Peter (though many think he gave it to the disciples who were there as Peter spoke for all of them). In Matt. 18 Jesus gives it to the Church. Now we see directly he give it to the other disciples when he places them in this office of reconciliation. Sure you can ask God for forgiveness in Jesus’ name but you won’t hear the absolution. Jesus provides a way we may hear his words of forgiveness through the pastors he sends to us through the Church and hear his Shalom, his Peace for us with God the Father.

Heavenly Father, always give us pastors who speak with Jesus’ authority so we may hear the words of absolution and receive your peace. In Jesus’ name we pray. Amen.