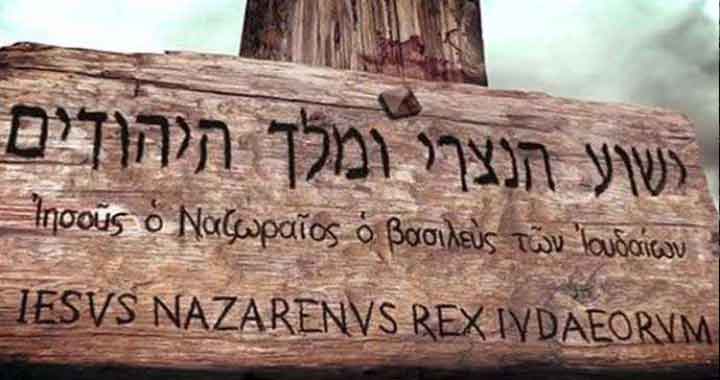 #DailyDevotion Jesus, King Of The Jews, Our Gospel

2 Tim. 28Keep in mind Jesus Christ risen from the dead, a descendant of David – this is the good news I tell. 9For this I’m suffering and am even chained like a criminal. But God’s Word isn’t chained. 10That’s why I can endure anything for the chosen people so that they, too, may receive salvation in Christ Jesus and everlasting glory.

The Lord had promised a descendent of David would sit on David’s throne forever. 1 Chr. 1711“When the time comes for you to go and be with your ancestors, I will set up your Descendant after you. He will come from your offspring, and I will establish His kingdom. 12He will build Me a temple, and I will establish His throne forever. 13I will be His Father, and He will be My Son, and I will never stop being kind to Him as I did to your predecessor. 14And I will have Him stand in My house and in My kingdom forever, and His throne will be established forever.”

Isaiah speaks of this descendent Isaiah 96“A Child will be born for us, a Son will be given to us, and the government will be on His shoulder, and He will be called Wonderful, Counselor, Mighty God, Everlasting Father, Prince of Peace. 7His government will grow, and there will be endless peace, to establish His rule on David’s throne and to uphold it with justice and righteousness now and forever.” Jeremiah says, 235“The days will come,” says the LORD, “when I will raise for David a righteous Branch Who will rule as King and act wisely. He will create fairness and righteousness in the land. 6When He comes, Judah will be saved, and Israel will live safely. This is the name that He will be called: The-LORD-Our-Righteousness.”

Jesus is this promise descendent. Jesus is building a temple, but not of stone, but living stones. All those who trust in him become a living stone making up the temple of God. Indeed, each one of us is a temple of the Holy Spirit. Jesus has ascended to the right hand of God from which he rules all creation for all eternity. This promised descendent is no ordinary man. For Isaiah gives him godly titles, “Mighty God, Everlasting Father, Prince of Peace.” Jeremiah says he will be called, “The Lord Our Righteousness.” This promised descendent of David will be and is the very Lord God of the Old Testament in the flesh.

This promised king is the King of Kings and Lord of Lords. He is not just the king and savior of the Jews and of Israel. Isaiah says of him 496He says: “It is not enough that You’re My Servant to raise the tribes of Jacob and bring back those in Israel who have been preserved – I have also made You a Light for the nations that My salvation might reach to the most distant parts of the world.” So Jesus is to be our Light as well.

This Jesus died and rose again, making atonement for our sins. Isaiah says, 534“Surely He has taken on Himself our suffering and carried our sorrows, but we observed that God had stricken, smitten, and afflicted Him. And certainly He was pierced for our transgressions and crushed for our sins; By His punishment, we were saved and by His wounds we were healed” Jesus resurrection is our proof God has accepted his sacrifice and we are saved from our sins and the wounds of our deadly sin has been healed in him.

Heavenly Father, you have sat one of David’s seed upon his throne forever having made him a sacrifice for our sin. You have raised him from the dead and seated him at your right hand so he may intercede for us. Grant us faith always in Jesus, our savior, that being united with him in baptism we too will be seated with him in the heavenly places forever. In Jesus’ name we pray. Amen.