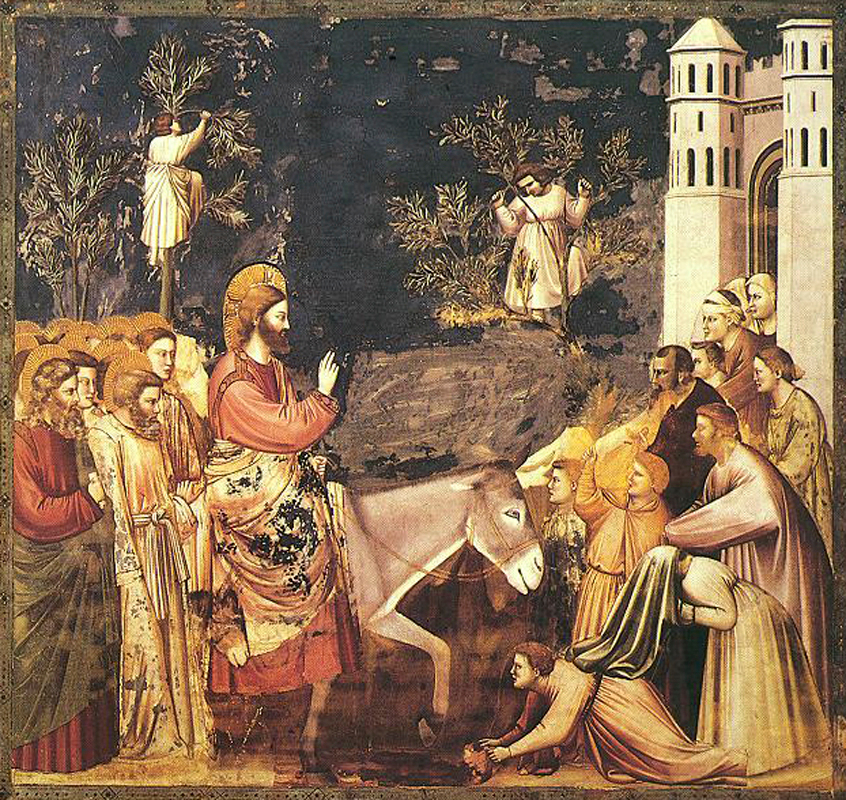 John 12:12–19 12The next day the large crowd that had come to the festival and heard, “Jesus is coming to Jerusalem,” 13took branches from the palm trees and went out to meet Him, shouting: “Our Savior! Blessed is He Who is coming in the Lord’s name, the King of Israel!” 14 Jesus found a donkey and sat on it, as it is written: 15“Don’t be afraid, daughter of Zion! Look! Your King is coming, riding on a donkey’s colt!” 16At the time His disciples didn’t know what it meant, but after Jesus was glorified, they remembered that these things had been written about Him and were done to Him.

The large crowd who had heard about it, who were in Jerusalem for the Passover, hearing Jesus was coming into Jerusalem went out to meet him with palm branches. It’s just what you do when you think your king is coming to you. They believed Jesus was their Messiah, the promised seed of David.

These crowds start shouting, “Our Savior! Blessed is He Who is coming in the Lord’s name, the King of Israel!” This is from Psalm 118. From this Psalm we also have these much quoted verses about Jesus, 22“The Stone the builders rejected has become the Cornerstone. 23The LORD has done this, and we think it is wonderful.” Appropriately for Jesus entering into Jerusalem the Psalm also says, 19“Open the gates of righteousness for me; I will go into them and thank the LORD. 20This is the LORD’s gate — the righteous go into it.” As the week progressed and particularly on the eve of Maunday Thursday and Good Friday, Jesus would need to remember these words from the Psalm, 5“In my trouble I called on the LORD. The LORD answered me and set me free. 6The LORD is for me, I’m not afraid. What can man do to me? 7The LORD is for me; He helps me. I will gloat over those who hate me. 8It is better to take refuge in the LORD than to trust men. 9It is better to take refuge in the LORD than to trust the best of men.”

Now this was to fulfill what the prophet Zechariah foretold, 15“Don’t be afraid, daughter of Zion! Look! Your King is coming, riding on a donkey’s colt!” The LORD probably foretold this to his people in remembrance of Solomon coming into Jerusalem, in first Kings chapter one, on David’s mule to be crowned king by King David his father. Now the real King of Peace is entering Jerusalem to make peace between God and men and men and men through his perfect sacrifice upon the cross awaiting him as the week comes to a close. Jesus is Israel’s king by right of birth, being the seed of David. He is also Israel’s eternal King, their LORD and their God who delivered them from the Egyptians and brought them into the Promised Land. Now he comes to deliver them and us from sin, death and the power of the devil and to bring us all into his eternal kingdom.

Merciful God and Father, you brought your Son, our LORD Jesus Christ into the world to be our sacrifice for sin and to bring us peace. Grant us such faith in him that we hail him as our king and look only to him for our salvation. In Jesus’ name we pray. Amen.