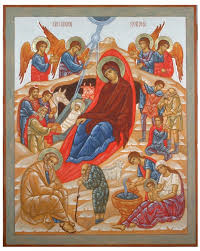 #DailyDevotion Jesus Is The New David

But you, O Bethlehem Ephrathah, who are too little to be among the clans of Judah, from you shall come forth for me one who is to be ruler in Israel, whose origin is from of old, from ancient days.  Therefore he shall give them up until the time when she who is in labor has given birth; then the rest of his brothers shall return to the people of Israel.  And he shall stand and shepherd his flock in the strength of the Lord, in the majesty of the name of the Lord his God. And they shall dwell secure, for now he shall be great to the ends of the earth.  And he shall be their peace.

Micah prophesied in the eighth century B. C. It was a time of great turbulence because the Assyrians were conquering many lands and they had their eye on Israel and Judah. The kings of Israel and Judah were either leading the people away from the Lord or they were following the people away from the Lord. In the midst of all that the Lord sends Micah with this message.

Among the smallest of the towns of Judah a new king would be born, a new David, where David was born. This child would come to rule Israel. He would not led Israel and Judah astray and would not be swayed by the people. He would be a good shepherd to the people of God.

Now this new David wouldn’t be just anyone, but his origins would be of old, from ancient of days. That is to say, the new David would be the Lord himself joining himself to the seed of David. The Lord was the King of Israel before they chose a human like themselves to rule over them. Now the Lord would be their king according to the flesh as well.

Jesus is this new David. Of the house of David, born in David’s town, he has led Israel and Judah, indeed the nations like a shepherd to the cross. There on the cross Jesus shows us the glory and the strength of the Lord. For there he conquers sin, death and the power of the devil. There the Father exalts Jesus’ name above every name in heaven above or earth below. Jesus means ‘the Lord saves’ and by his saving act, saving the whole world by offering himself up as an atoning sacrifice for the sin of the world.

We can dwell securing in the name and the work of Jesus. We put our faith in what he has done to save us and not only us, but everyone. No one can say Jesus didn’t die for them and gain for them eternal life. With this faith we can face every doubt and every attack of the evil one. But there is coming a day, when our Lord Jesus Christ returns that we will not even be attacked anymore. For he will come on the clouds, with the authority of the Ancient of Days, with all his holy angels and they will uproot all that which is evil and wicked in this age and cast it into the Lake of Fire never to torment us ever again.

In the meantime, Jesus is our peace. When our flesh, when the world, when the devil and his minions try to persuade us that God is angry with us, we point to a tree, maybe just two intersecting lines and say, on the tree, on a cross Jesus made peace between God and man. He has put away my iniquities and transgression and is reconciled to me.

Heavenly Father, we praise you for sending your Son into our flesh that he may be the promised seed of David who would bring peace to the world. Grant us always this peace in our hearts. In Jesus’ name we pray. Amen.