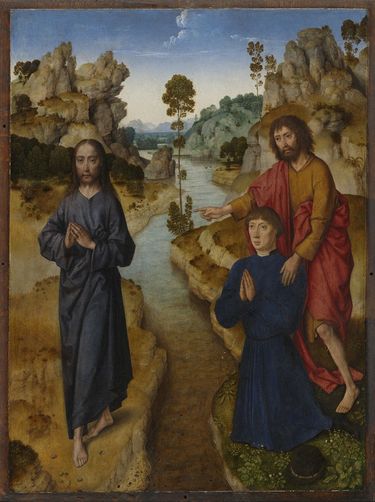 #DailyDevotion Jesus Is The Fulfillment Of All Sacrifices

John 129The next day John saw Jesus coming toward him. And he said, “Look at the Lamb of God Who takes away the sin of the world. 30He is the One I meant when I said, ‘A Man is coming after me but is ahead of me, because He was before me.’ 31Even I didn’t know Who He was, but I came and baptized with water to show Him to Israel.” 32John testified: “I saw the Spirit come down from heaven as a dove and stay on Him. 33I didn’t know Who He was, but He Who sent me to baptize with water told me, ‘When you see the Spirit come down on Someone and stay on Him, He is the One Who baptizes with the Holy Spirit.’ 34I saw it and testified, ‘This is the Son of God.’”

This is a great text for the season of Epiphany. Jesus is being made manifest as the son of God not by signs and wonders but by the proclaimed word of God. John is the one making the proclamation. Seeing Jesus coming towards him he makes the gospel proclamation, “Look at the Lamb of God Who takes away the sin of the world.” Behold the Lamb of God!

What is John saying here? What has been revealed to him by the Holy Spirit which he is making known to us about Jesus? As far as I know, there are no explicit proclamations of a sacrifice of a lamb that atones for the sin of the world. Yet there are plenty types, allusions and prophecies concerning the messiah to come. In this proclamation by the Baptist he is making known there is to be one sacrifice to end all sacrifices. All of the sacrifices in the Law of Moses will be fulfilled in this man. In the Law there was a morning and evening sacrifice for the sins of Israel with a lamb. There was the sacrifice for individual sins with a lamb. There were the atoning sacrifices on the day of atonement with two goats and a bull.

And those sacrifices were for the people of Israel. But in Genesis 3:15 we are told about the seed of the woman who crushes the head of the serpent and is struck in his heel. Abraham is told his seed would be a blessing to the nations of the world and see the Lord provides a substitutionary ram in place of his son Isaac. We are told in Isaiah of the servant of the Lord who saves not only Israel but the nations as well. Isaiah prophecies how through his suffering our iniquities are atoned for, our guilt taken away and our sins are forgiven. And note the Baptist says Jesus takes away the sin of the world. Sin is in the singular. Jesus is the second Adam. By Adam’s sin, sin and death enter the world. By Jesus’ faith and obedience, righteousness and life enter the world.

John proclaims and makes Jesus known by what was revealed to him. The Spirit came upon Jesus in the form of a dove when he was baptized by John. The one who sent John, the Spirit, made known to him that when this happened, the anointed of the Spirit is the one who baptizes with the Holy Spirit. John baptized to make Jesus known. His baptism prepared the way for the LORD. Jesus is that LORD. John tells us, “This is the Son of God.” This Jesus of Nazareth is the promised sacrificial Lamb who takes away the sin of the world. He has taken away your sin and death and gives you his righteousness and life. For there is only one sin and there is only one righteousness and life. He is the tree of life whose fruit he gives to you freely.

Almighty God and Father, you sent your Son Jesus Christ to be the atoning sacrifice for the sin of the world. Grant us faith to believe this and receive from him eternal life and his righteousness. In Jesus’ name we pray. Amen.