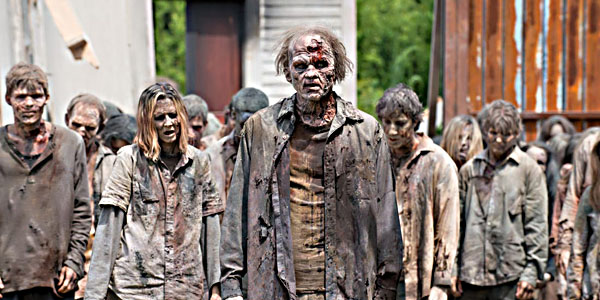 #DailyDevotion Jesus Is The Cure For The Zombie Apocalypse

Ephesians 2:1-5 You, too, were dead in your transgressions and sins, 2in which you once followed the ways of this present world and the ruler whose power is in the air, the spirit who is now working in the people who disobey. 3Among them all of us once lived in our fleshly lusts, doing what our flesh and mind wanted to do, and by nature we, like the others, were people with whom God was angry. 4But God, Who is rich in mercy, loved us with such a great love. 5He made us who were dead in sins alive with Christ. (You have been saved by grace.)

So I heard an interesting piece on this particular passage this week. In the Greek there are a range of words for being dead apothnenesko and necros. Thanos, you know, like the villain in Marvel’s Infinity War gets his name from the first. Do you also find it strange an alien has a name that is Greek? In this passage necros is the dead being used. It means corpse. A corpse is a lifeless body.

So what is Paul saying here? He is saying before we are born from above, born of God, even though we are respirating, brains cells popping, and heart pumping we are nothing but corpses in our trespasses and sins. I find it interesting when the LORD told Adam the day he ate the fruit he would die, the Septuagint (Greek translation of the Hebrew) says, Thanotos Apotheneisko, a death you will die. When Adam ate the fruit and he experienced a death you will die, he and all his progeny (you and I) became necros, corpses. It’s like we already experienced the zombie apocalypse. Everyone out there is the living dead. They simply do not know it. They think they are alive but they are the living corpses running around. As living corpses, the one who brought us to this state, the ruler whose power is in the air, the spirit who is working through those who disobey, i.e. Satan, the devil, runs their lives. When we were living corpses, we too were under the influence of the devil, living according to our fleshly lust, following the inclinations of our flesh and unregenerated mind. Because we lived in this way, we were under the wrath of God as all are who don’t have the life of God in them.

Our LORD and God though, who is rich in mercy, out of his great love for his creation, provided a cure for this zombie apocalypse. He made us who were dead in sins alive in Christ. The Son of God took on our human flesh. He died on the cross. He became a corpse like us and as a corpse he overcame death and the grave in his resurrection. As you know, corpses don’t do anything but lie there cold and decay. But Jesus gives us himself, who is the Life of the World, and gives us his life. This is purely by his grace, (by grace you are saved). You can’t do anything to earn this grace. In the Gospels when Jesus raises people from the dead, he raises corpses, necros, back to life. When he baptizes us, he gives us his Holy Spirit, he gives us his life and raises our souls from being dead to being alive. In Christ, we now are the dead living. Our bodies are still good as corpses but our spirit is now alive. Having Christ’s life, we walk not according to the spirit of the air, in sins and fleshly desire, but according to the Spirit of the Living God. When Jesus returns, our gift of immorality, the life in us, will overcome our necros, our corpse nature and raise us in bodies are immortal, imperishable, glorious, powerful and spiritual (living by the Spirit of God). Jesus, his baptism, his absolution, and his supper are the cure for the zombie apocalypse and he gives it to us all free of charge, by grace you are saved.

Merciful Father, you sent your Son Jesus Christ into the world to give us his life and rescue us from death. Grant we may have this faith and not only have new life now but be raise to immortality and life when he returns in glory. In Jesus’ name we pray. Amen.