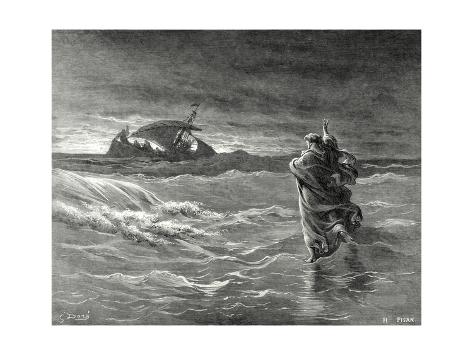 #DailyDevotion Jesus Is He Who Walks On The Waves Of Life. Have Courage!

Matt. 1424The boat, now many hundred yards from the shore, was troubled by the waves because the wind was against them. 25Toward morning He came to them, walking on the lake. 26When the disciples saw Him walking on the lake, they were terrified. “It’s a ghost,” they said, and they cried out in terror. 27Immediately He talked to them. “Have courage,” He said. “It is I. Don’t be afraid.” 28“Lord, if it’s You,” Peter answered Him, “order me to come to You on the water.” 29“Come,” He said. So Peter got out of the boat, walked on the water, and went toward Jesus. 30But when he saw the wind, he was frightened and started to sink. “Lord, save me!” he cried. 31Quickly Jesus stretched out His hand and caught him. “How little you trust Me!” He said to him. “Why did you doubt?” 32When they stepped into the boat, the wind stopped. 33 And the men in the boat bowed down before Him and said, “You certainly are God’s Son.”

Sometime between three and six in the morning Jesus finishes praying and sees his disciples struggling with the boat because the wind and the waves were giving it a hard time. Jesus decides to go out to them, that is walk on the water to their boat. Now it isn’t that Jesus knows where the stones are. The disciples are far enough out there aren’t any stones. When the disciples see Jesus walking on the water towards them they were terrified. They think they see a ghost. It’s not clear if they think it is any old ghost or Jesus’ ghost (remember Herod had killed John at the beginning of the chapter). It is quite certain in the disciples’ mind that this can only be supernatural and supernatural it is.

Jesus walking on the water also tells us who this is besides a ghost. Job says of the LORD, 98“He alone stretched out the heavens and walks on the high waves of the sea.” The Psalmist says, 934“but more than the noise of vast waters and mightier than the waves of the sea is the might of the LORD above!” Isaiah says of the LORD, 4316 The LORD has said this. He makes a way through the sea and a path through mighty waters.” Jesus is the LORD, the very same LORD these Old Testament passages speak of. It is no wonder when Jesus and Peter get into the boat, the disciples worship Jesus and say, “You certainly are God’s Son.”

Jesus replies, “Have courage. It is I. Don’t be afraid.” Now when Jesus says, “It is I” what he is saying in the Greek is ego eimi, I am. Now in Matthew unlike in John, when Jesus says this he is probably not speaking the divine name YHWH. He still may be making reference to divinity though through a different Old Testament passages, in particular from Isaiah. He writes Isaiah 414“…Who calls every generation from the beginning? It is I the LORD, the First and the Last.” Again in verse 10, “Don’t be afraid – I am with you Don’t look around anxiously — I am your God. I will strengthen you; yes, I will help you. I will support you with My victorious right hand.” Isaiah says later, 5112“I, I will comfort you. Why should you be afraid of mortal man, of mere men who are doomed like grass?” Jesus, the LORD who in Isaiah says don’t be afraid also now tells his disciples to have courage and not be afraid. He is the LORD who is with us, Immanuel. In the midst of storms, winds and waves in your life, have courage and don’t be afraid. Jesus is he, he who is with you and for you. He will not pass by but stay with you in and through your troubles.

Heavenly Father, Jesus showed us who he is, the LORD, as he walks on the waves and speaks to us have courage. Grant us of little faith to have courage and walk with Jesus. In Jesus’ name we pray. Amen