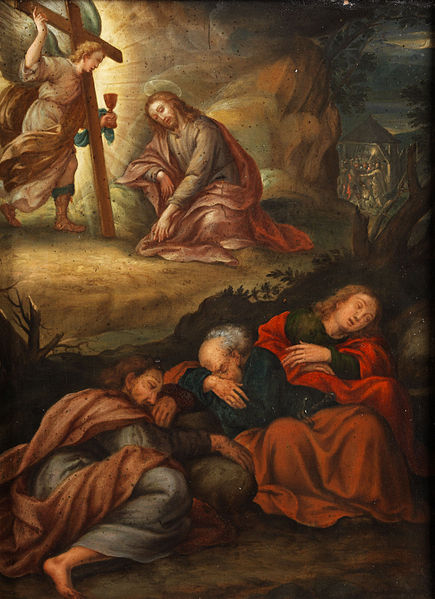 Hebrews 5:7-10  7In His humble life on earth Jesus came to Him Who could save Him from death and prayed and pleaded, crying loud with tears, and because He feared God, He was heard. 8Although Jesus is the Son, He learned from what He suffered what it means to obey. 9And when He was finished, He became One Who gives everlasting salvation to all who obey Him, 10being proclaimed by God a high priest like Melchizedek.

This passage here deals mostly with what Jesus humiliation means. In the creeds it refers to his conception, life, death and burial. Jesus demonstrated to us what true humility is and gave us his example to follow. His humility saved us from our sins. Paul writes of our LORD’s humility thus, 6“Although He was God, He did not consider His being equal with God as a prize to be displayed, 7but He emptied Himself, made Himself a slave, became like other human beings, 8and was seen to have the ways of a man. He became obedient and humbled Himself until He died, yes, died on a cross.” Jesus humbled himself before the Father. He came to his Father, prayed and pleaded, crying loud with tears to be saved from what he was to be experience. We hear this in the Gospel, “My Father, if it is possible, let this cup pass away from Me. But let it not be as I want it but as You want it.” (Matt. 26:39)

Even though Jesus is the Son, the Father did not let this cup pass from Jesus. Jesus, as man, learned from his suffering what it meant to obey. He would be betrayed, handed over to men, be falsely accused, be beaten, shamed and die on the cross an excruciating death. He obeyed, that is he trusted his Father, that he knew what he was doing. The Father heard Jesus’ prayer and although he did not deliver Jesus from suffering this fate, he delivered Jesus from the grave, raising Jesus from the grave and exalting him to his right hand.

Having completed his humiliation he experienced his exaltation. In the creeds this is from his descent into hell to coming again in glory to judge the living and the dead. Seated at the right hand of the Father, Jesus gives salvation to everyone to obeys him, that is trust in him. Like our LORD Jesus Christ, we too will learn from suffering what it means to obey. The Father will lay down crosses upon us in our lives. We may, like our LORD Jesus Christ suffer even unto death. But trusting in our LORD’s promise of eternal life, if we remain faithful unto him unto death, we too will be exalted like Jesus in his resurrection and ascension to the right hand of the Father, even being placed on our Father’s throne.

Jesus our high priest, like Melchizedek who brought out bread and wine to Abraham, refreshes us with his body and blood in the Sacrament. He blesses us and gives us our enemies into our hands. Yet, like Jesus, we are called to be humble in this time. Paul writes in Phil. 1, 3“Don’t be selfish or proud, but humbly treat others as better than yourselves. 4Each of you, don’t be interested in your own things, rather in the things of others.  5Think just as Christ Jesus thought.” His humility was not for himself but for our salvation. Our humility is also not for ourselves but for our fellow man, so they too may know the love of God.

Heavenly Father, even as your humbled your son Jesus Christ our LORD you exalted him to your right hand from which he gives us salvation. Grant us faith in him so as we are humbled in this life we may be faithful to him so we too may be exalted him in to your praise and glory. In Jesus’ name we pray. Amen.