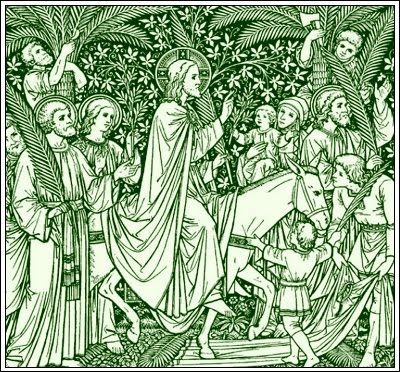 Zechariah 9:9–12 9Be very happy, people of Zion! Shout aloud, people of Jerusalem. You see, your King will come to you, He is righteous and victorious, poor, and riding on a donkey, on a young burro, the colt of a donkey. 10He will get rid of the chariots in Ephraim and the war horses in Jerusalem; He will also get rid of the bow used in battle. He will talk peace to the nations, and He will rule from sea to sea and from the Euphrates river to the end of the world. 11As for you also, because you have a covenant made with blood, I’ll send your captives out of the waterless pit. 12They will return to the fortified city as captives who have hope. Even now I’m telling you I’ll restore to you twice as much for all you’ve gone through.

These familiar words of Zech. 9:9 for Palm Sunday are not only found here but elsewhere in Scripture as well. The people here are called to rejoice, “Be very happy, people of Zion!” The reason for rejoicing are also similar elsewhere, even in Zechariah. Here it is because her king has come to them, “righteous and victorious.” In chapter 2 the LORD tells us, 10“Sing out and rejoice, people of Zion, because I will come and live among you,” says the LORD. 11“On that day many nations will join the LORD and become My people. I will live among you; you will know the LORD of armies sent Me to you. 12And the LORD will take Judah as His own in the holy land, and He will again choose Jerusalem.”

Zephaniah proclaims, 314“Sing happily, daughter of Zion! Shout, Israel! Be glad and rejoice with all your heart, daughter of Jerusalem. 15The LORD will cancel your punishment. He will drive out your enemies. The King of Israel, the LORD, is among you.” This also tells us of Jesus’ entry into Jerusalem for he is the King of Israel and the LORD who is among them. He comes to Jerusalem to cancel her punishment and to drive out her enemies by his death and resurrection.

The prophet Isaiah tells us 12:5“Sing to the LORD — He has done wonderful things. The whole world should know about it. 6Call out loud and shout, you who live on Zion. Great is the Holy One of Israel, Who is among you.” Again he says, 40: 9“Get up on a high mountain, Zion, to tell the good news! Call with a loud voice, Jerusalem, to tell the good news! Raise your voice without fear, tell the cities of Judah: “Here is your God!” 10See the Lord GOD coming as a Mighty One to rule with His strong arm.” 52:9“Break into loud singing together, ruins of Jerusalem! The LORD comforts His people; He redeems Jerusalem.” Isaiah says in 62:10“Go through, go through the gates; prepare a way for the people. Heap up and build a highway. Clear away the stones. Raise a flag for the people. 11The LORD announces to the most distant part of the world: Tell the daughter of Zion, ‘Look, your salvation is coming. See, His reward is with Him, and what He has earned goes ahead of Him.’” As Jesus enters Jerusalem for Holy Week, the Holy One is among them. Their God is there in Jesus with his strong arm to be bared on the cross. He redeems them as he is the raised flag on the cross earning their reward, their salvation.

And so here in Zechariah Jesus speaks peace to the nations and makes a covenant with blood to take out those in the waterless pit of Hades, Sheol, the grave and raises them to newness of life now and everlasting salvation when he returns again in glory. On that day he will end all wars and get rid of all instruments of battle. Cause for rejoicing as he has spoken it, it is as good as done.

Heavenly Father, may we indeed rejoice and be very happy in the work of your Son Jesus Christ for our salvation, now and forevermore. In Jesus’ name we pray. Amen.