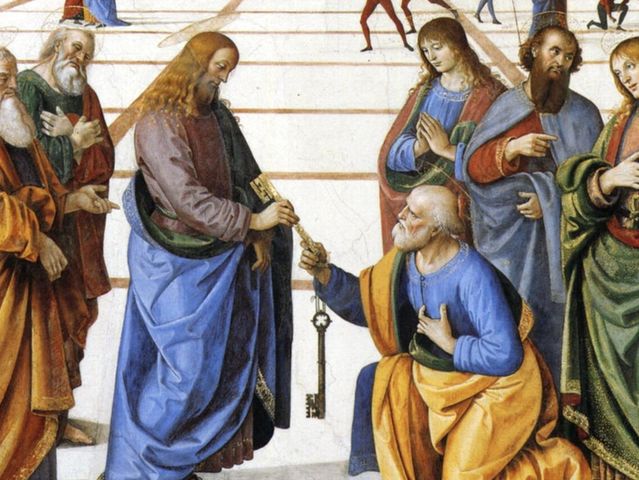 #DailyDevotion Jesus Gives The Keys To The Kingdom To The Church

Matt. 16 18I tell you, you are Peter, and on this rock I will build My church, and the forces of hell will not overpower it. 19I will give you the keys of the kingdom of heaven. Anything you bind on earth will be bound in heaven, and anything you free on earth will be freed in heaven.” 20Then He warned the disciples not to tell anyone that He was the Christ.

When Peter speaking for the disciples makes his confession that Jesus is the Christ, the Son of the Living God Jesus speaks these words to Peter and in conjunction with Peter the rest of the disciples. Jesus calls Simon, Peter, a rock. We know in the Gospel of John, Jesus name Simon when he first called him to be a disciples, but this is the first place in the gospel of Matthew that Jesus addresses him as such. Peter is not a name nor is Cephas (the Hebrew equivalent) that is in any other literature as a name before the Gospels and the New Testament Church came into being. It is a name specifically given to Peter by Jesus in their day and age.

Related to Peter, (which is petros, the Greek with a male ending) Jesus says he is going to build his church on this rock (petras, the Greek with a female ending—most foreign languages denote gender of noun, animate and inanimate). So while “this” has something to do with Peter, Peter and the “this rock” are distinguished by Jesus by his choice of words.

What is the rock, petras, that is the foundation of Jesus’ church? It is the confession that came from Peter’s, Petros, lips, you are the Christ, the Son of the living God. Indeed, this confession is the basis of all Christianity, Jesus is the anointed son of David and he is the eternal son of God, come into the world to fulfilled what he had promised through the Law and the Prophets. In this crazy world we live in where it seems as if Jesus’ church is consistently attacked we may wonder sometimes if it will survive. Jesus promises us, “the forces of hell will not overpower it.” Indeed, nothing can overcome Jesus’ Church. It may get beaten up, bruised and even lose limbs at times but better than the Engergizer Bunny, it takes a licking and keeps on ticking.  We need not fear the Church of Jesus Christ will ever be overcome. Jesus is at the right hand of the Father exercising all rule and authority on behalf of his bride the Church.

Now Jesus also says something else amazing. He tells Peter, who does represent all the apostles here, the keys to the kingdom of Heaven are given unto him. Whatever he frees is freed and whatever is bound is bound in heaven. What exactly is Jesus talking about? Is he to make some Laws binding on Christians while inventing new laws for Christians to keep? What are the keys to be used for? What’s being locked up? What’s being opened? The kingdom of heaven, that is what. Two chapters later Jesus tells us, 18“I tell you the truth, whatever you bind on earth will be bound in heaven, and whatever you set free on earth will be free in heaven. 19Again I tell you, if two of you here on earth agree to ask for anything, My Father in heaven will do it for you.” What is the context here? It is the forgiveness of sins. Here what Jesus told Peter is now given to the Church. It is not solely Peter’s to exercise. In John 20:23 Jesus tells all the disciples, 23Whenever you forgive people’s sins, they are forgiven; whenever you do not forgive them, they are not forgiven.” So the Church and her pastors may always bind and forgive sins, opening the kingdom to some and closing it to those who will not repent of their sins.

Heavenly Father, grant us your Holy Spirit that we may rightfully loosen and bind sins, open and close the kingdom of heaven to those to whom you have appointed it. May Christ’s promise always strengthen us in our faith so we may not lose hope. In Jesus’ name we pray. Amen.