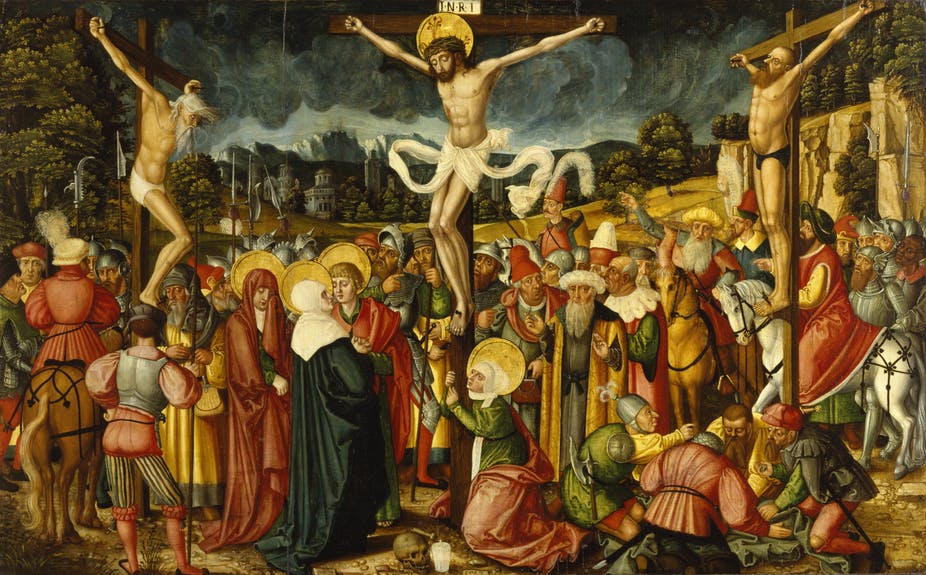 #DailyDevotion It Is Written & Fulfilled By Jesus

Luk 23:33-36  And when they came to the place that is called The Skull, there they crucified him, and the criminals, one on his right and one on his left.  (34)  And Jesus said, “Father, forgive them, for they know not what they do.” And they cast lots to divide his garments.  (35)  And the people stood by, watching, but the rulers scoffed at him, saying, “He saved others; let him save himself, if he is the Christ of God, his Chosen One!”  (36)  The soldiers also mocked him, coming up and offering him sour wine…38  There was also an inscription over him, “This is the King of the Jews.”…46  Then Jesus, calling out with a loud voice, said, “Father, into your hands I commit my spirit!” And having said this he breathed his last.

It is written, Psa 22:16-18 “For dogs encompass me; a company of evildoers encircles me; they have pierced my hands and feet—  (17)  I can count all my bones— they stare and gloat over me;  (18)  they divide my garments among them, and for my clothing they cast lots.” And so they crucified our Lord Jesus Christ. They nailed his hands and feet to the cross piercing them through so on the day of his return we may indeed indentify him as the Lord’s Messiah, for it is written, Zec 12:10  “And I will pour out on the house of David and the inhabitants of Jerusalem a spirit of grace and pleas for mercy, so that, when they look on me, on him whom they have pierced, they shall mourn for him, as one mourns for an only child, and weep bitterly over him, as one weeps over a firstborn.” Again it is written, Rev 1:7 “Behold, he is coming with the clouds, and every eye will see him, even those who pierced him, and all tribes of the earth will wail on account of him. Even so. Amen.” The Roman soldiers fulfilled the word, “They casts lots to divide his garments.”

Yet in the midst of this trial, at the height of his suffering, Jesus has mercy on those who crucify him and those who brought him to this place. He cries out, “Father forgive them for they know not what they do.” Indeed had they known, they would not have crucified the Lord of glory.(1 Cor. 2:8) Indeed even we are included in this petition of Jesus. He prays that we too would be forgiven. Upon the cross he pours out a spirit of grace. The forgiveness Jesus prays for here, we too as joined to him in the Spirit pray for those who have sinned against us.

It is written, Psa 22:6-8 “But I am a worm and not a man, scorned by mankind and despised by the people.  (7)  All who see me mock me; they make mouths at me; they wag their heads;  (8)  ‘He trusts in the LORD; let him deliver him; let him rescue him, for he delights in him!’” So those who gather under the cross, the Jews and the Romans mock Jesus. Even those crucified mock Jesus, though one repents and enters into Paradise with Christ Jesus on that day. Jesus does not listen to the mockery but steadfastly stays upon the cross, suffering its grief, pain and shame to save the world who does not recognize their Creator.

It is written, Psa 22:19 “But you, O LORD, do not be far off! O you my help, come quickly to my aid!” So Jesus commits his spirit into the hands of the Father. He is not far off, but as Abraham was with Isaac, so the Father is with the Son Jesus Christ, even unto the sacrificed is finished. Jesus offers up his life that the world may receive it and live. In three days time, the Father will raise Jesus from the dead, even as Isaac was received back to life on the third day.

Heavenly Father, as we ponder our Lord’s passion, grant us faith to trust in his sacrifice that we may receive the life he offered up on the cross and live in that life forever. In Jesus’ name. Amen.