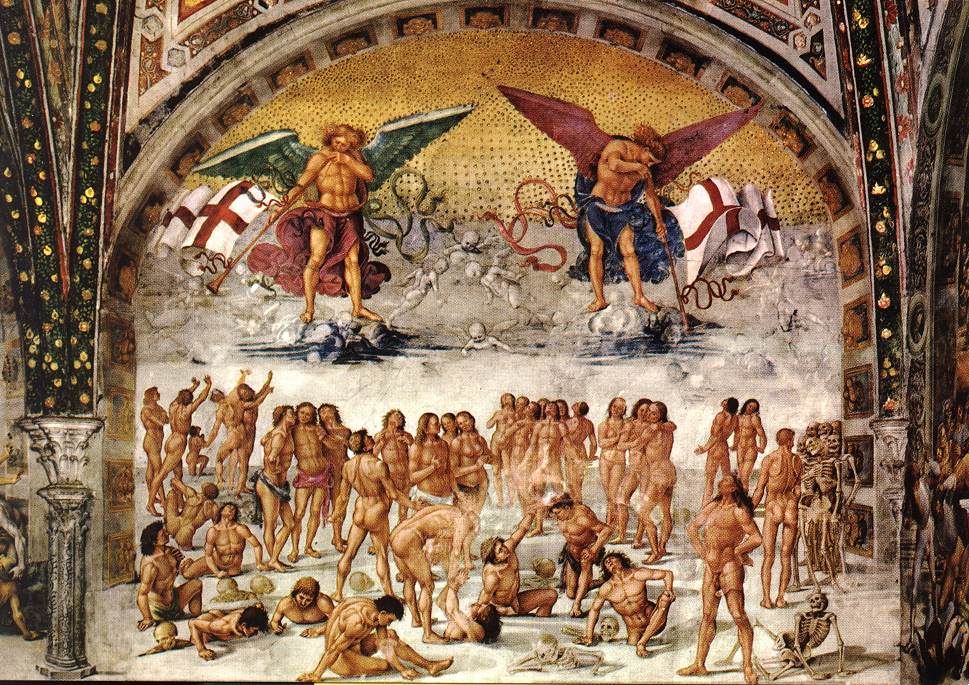 #DailyDevotion In Adam You Died, In Jesus You Are Raised From The Dead

1Co 15:21-26  For as by a man came death, by a man has come also the resurrection of the dead.  (22)  For as in Adam all die, so also in Christ shall all be made alive.  (23)  But each in his own order: Christ the firstfruits, then at his coming those who belong to Christ.  (24)  Then comes the end, when he delivers the kingdom to God the Father after destroying every rule and every authority and power.  (25)  For he must reign until he has put all his enemies under his feet.  (26)  The last enemy to be destroyed is death.

So why does God punish us all for one man’s sin namely Adam? We could also rightly ask, why does God save us all for one man’s obedience, namely Jesus. Indeed, while we may not completely understand the metaphysics of it all, all of us were in Adam and sinned with Adam when Adam sinned. When Adam sinned he died that day. The life that was in him ceased to be. That death was in his whole being including his seed, from which we all are descended. Paul also has this discussion some here, Rom 5:12 “Therefore, just as sin came into the world through one man, and death through sin, and so death spread to all men because all sinned—14-16 “Yet death reigned from Adam to Moses, even over those whose sinning was not like the transgression of Adam, who was a type of the one who was to come.  (15)  But the free gift is not like the trespass. For if many died through one man’s trespass, much more have the grace of God and the free gift by the grace of that one man Jesus Christ abounded for many.  (16)  And the free gift is not like the result of that one man’s sin. For the judgment following one trespass brought condemnation, but the free gift following many trespasses brought justification.” As it is the soul that sins dies. Adam sinned, his soul died. That death has been passed down to us so we now sin and we die as well.

But the Lord in his great mercy sent his son Jesus to be our life. Just as Adam’s sin brought sin and death to his descendents so now Jesus’ obedience, suffering, death and resurrection bring life for all mankind. The free gift of eternal life was bought by Jesus and is offered to you today. You did not earn or merit it. It is a gift. His gift of life brings justification. His gift of life and justification brings the resurrection from the dead.

Indeed, Jesus’ resurrection is so powerful it will not only raise from the dead all who believe in him but also all mankind on the Last Day. True, some will be raised to everlasting perdition but they are raised. Those who called upon his name will be raised to everlasting life. Jesus is the firstfruits of the dead. All of mankind from Adam until Jesus died and were planted in the ground. Jesus is the first one to be raised immortal. Jesus has conquered death. Those who belong to him will also conquer death on the day of his revelation. That is our Christian hope, to be resurrected bodily from our graves and to live with the Lord forever.

Until that time, Jesus rules at the right hand of the Father (the symbolic millennium rule of Christ Rev. 20). When he visibly comes again with the angels in the clouds, he will subject every rule, authority and power to himself and destroying them. He is currently in the process of doing this for it says, “he must reign until he has put all his enemies under his feet.” Finally, at his return, with the resurrection of all human flesh, the last enemy to be destroyed is death. In his kingdom there will be no more sinning and since there is no more sinning, there will be no more death. At that time, the Son will deliver the kingdom to God the Father, so everything will all in all one with and in the Father, the Son and the Holy Spirit.

Heavenly Father, we thank you for restoring life back to man after the fall of Adam through the death and resurrection of your Son Jesus Christ. Grant us faith that we may put our trust in him and receive the resurrection after his own, unto eternal life at his return. In Jesus’ name we pray. Amen.